At present, Gaudi is the three-way multi-amplifier system (tri-amplified system) as I planned in 1974 (block diagram), except the following two differences:

Since midrange has a significant influence to sound quality of the system as a whole, I am planning to upgrade the midrange some day in the future. But I can hardly afford so far. On the other hand, Gaudi also functions as a single-amplifier system by switching the midrange to full-range with a switch of the network CD-211. I often select this system configuration when I want to enjoy music casually or want some background music. I am kind of satisfied with the current system design. I would like to use Gaudi as it is for the time being.
[Block diagram] 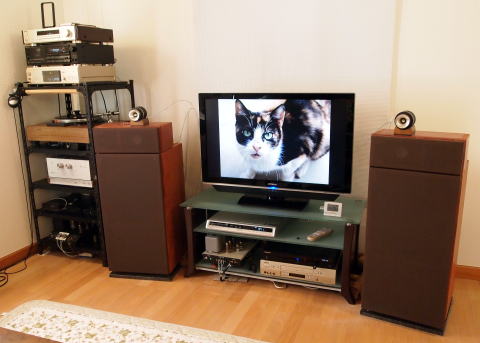 The tone of the three-way system resembles that of the full-range closely. It can be said that 6N-FE88ES has great influence to the whole system. Of course, the three-way is more excellent than the full-range in sound quality; both the low and high ends are extended, and the amount of information reproduced is far more than the full-range; the acoustic image is more clear, and localization of sound is more accurate.
However, I sometimes feel I get too much information. For example, while listening to performance of the harmonica (CD, Joe Sakimoto, The Art of Harmonica, CAMERATA 30CM-482) with the three-way system, I sometimes feel uneasy because the sound of breathing can be heard clearly, which cannot be heard so clearly with the full-range. The same thing goes for Bill Evans' live recording, Waltz for Debby (LP, Bill Evans Trio, Waltz for Debby, Analog Productions APJ009). I sometimes feel the background sounds are a little too noisy.

I think 6N-FE88ES is excellent for a full-range driver. Though its power capacity is as low as 4W, it surprisingly produces undistorted sounds at the top volume. As might have been expected, bass is not enough, but the overall sound quality is enough to enjoy music.

There have been a number of small improvements in Gaudi, such as upgrade of the cables and insulators, though there haven't been a big one since I designed and built CD-211. Interestingly, vinyl records have been getting more and more attractive than CDs as I improve Gaudi. The medium of the highest sound quality in Gaudi is vinyl record, and SACD, CD, cassette tape and FM follow it in this order. FM is worst because the reception is currently bad. It seems that SACD is not popular even among audiophiles, though, SACD is superior in sound quality to CD, as long as I listen to it with Gaudi.

Though I don't like nostalgia for the good old days, I can't help wanting vinyl records for they are the best in sound quality. I am collecting records. I cherish old records, though, I want new HQ disks more eagerly. They are scarcely available in Japan. I import them from a record shop in USA.
Among records I have imported lately, the following ones are my favorite: Sonny Clark's Cool Struttin' (LP, Blue Note BST81588), Eden Atwood's Waves - The Bossa Nova Sessions (LP, Grove Note GRV1012), and Joshua Redman's Mood Swing (LP, Nonesuch 45643).

Each time I have a guest, I let him/her listen to Gaudi. Many of them looked pleased with the sound of Gaudi. Some of them apparently flattered. I can tell whether the guest is flattering or not by looking at his/her facial expression when he/she is listening. Generally, women tend to have better hearing than men and utter her impression without hesitation. So I take women's comment seriously.
The sound of vinyl records may appeal to young generation too. I have had several chances to play records for young people. They were delighted. Some of them was listening with shining eyes. I do believe our generation should teach our knowledge about analog records to young generations.