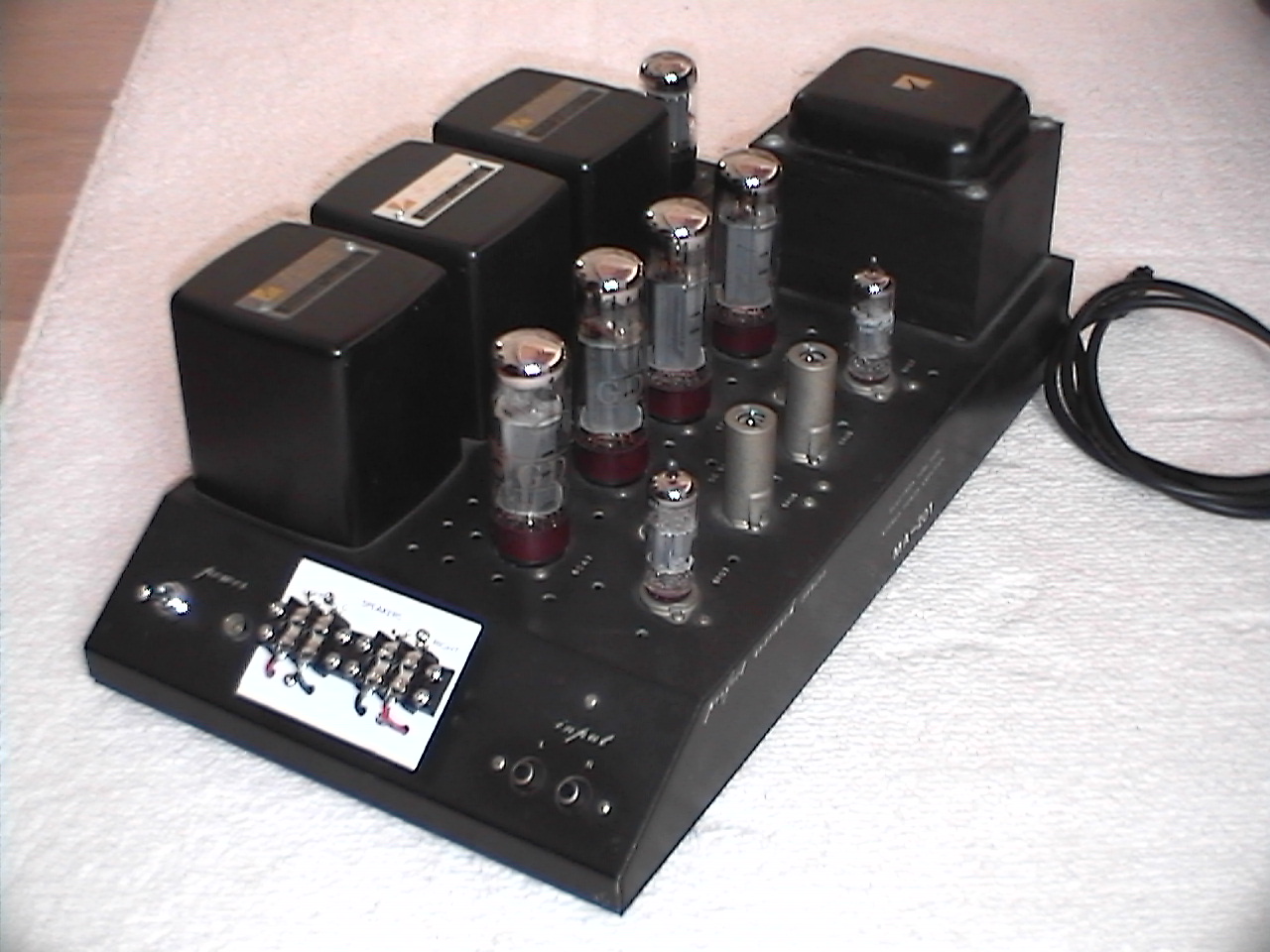 The following contents were reprinted from the page of MA-201 on my previous homepage 'Tonochi's Audio Room'. The page describes my activities concerning this power amplifier from 1974 through 2017.

MA-201 is the commemorative first work branded NOBODY. What I aimed at was a high-grade power amplifier for horn-loaded midrange drivers. It was my first challenge to make high-grade audio equipment.
In spite of its final goal, Gaudi was not a multi-amplifier system yet in those days, and I planned to use MA-201 as a full-range amp for the time being. So I fixed the spec of MA-201 as a full-range amp. I thought the maximum output power of 15-20W was satisfactory as horn-loaded drivers have high sensitivity, and the magnitude of NFB should be 20dB or so in order to achieve high SNR.

Reading the paragraph above, you might feel as if I had been a professional engineer at that time. No, I wasn't. I was not able to design circuits myself. So I looked for a design that met my requirements in books and magazines related to craft audio.
I found out a good article in a book 'Kankyu-shiki Stereo Amplifier Seisaku 80 Sen Vol. 1' written by Yoshiro Uesugi. The circuit design was based on the legendary tube power amp, Marantz Model 8B, and its spec was what I wanted. All the parts used on it were available at Akihabara. It was so satisfactory I decided to make it.

Later I had a chance to listen to Marantz #8B at an event held at Japan Audio Fair 1974, where the lecturer was Mr. Yoshiro Uesugi. I was so impressed by its high sound quality. I wondered why it had been discontinued.

As mentioned above, this circuit design was not my own. I intended to follow the original design, but I changed the power supply circuit because I couldn't obtain the power transformer in the original design. It was LUX 5A68, and not available at Akihabara. I purchased LUX 9A68 instead. Because the voltage of the secondary winding of 9A68 was higher than that of 5A68, I decided to use rectifier tubes instead of silicon diodes. The diode tube drops the voltage to just the right extent due to its internal resistance.

I used the diode tubes as a desperate shift. As a result, I got a new understanding about their strong points years later; they have no switching noise and protect bypass capacitors with its slow start when power is on.

I connected the output tubes as triode, as in the original design. The maximum output power was 20W.
[schematic: drawn in 1995]

I bought a case designed for tube amps. It was Lead GT-1, which was painted in mat black and looked a little like McIntosh. It was reasonable, though, its welding was so weak that one of welding points was broken during assembly.
I re-designed part layout because the dimension of the case was different from that of the original and I employed two rectifier tubes instead of silicon diodes. I mounted large e-caps inside the case because there was no room for them on the top panel.

I used a connector for AC input so that I could change the power code with ease. Later, I found out each power code has its tone color. I told this fact to my friends, but no one believed it. It departed from common sense in mid 1970s.

In those days, there was something wrong with a tube power amp I had made in 1972 (6BM8 single). The trouble was solder fracture. It was only two years since I had made it. I was not well trained in soldering.
I used to apply flux to a joint before using a soldering iron in order that soldering was done quickly and neatly. In this way, some flux remains in solder. Years later, soldered joints became fractured.

I decided to give extra care to soldering for MA-201. I didn't use extra flux. And I kept the tip of the soldering iron touching the joint as long as the components were not damaged. I kept the tip at the joint at least until smoking stopped (the flux was burnt out).

I neatly aligned the wires and harnessed them into a loom so that they look beautiful. I was satisfied with my craftsmanship, and showed the wiring to my friends to boast.
Years later, however, I knew the beautiful wiring adversely effects the sound quality because the alignment increases the lengths of wires and their resistance, binding wires increases stray capacitance, and bending wires at right angles increases stray inductance and causes micro cracks on the surface of the conductor, which impede the current from flowing smoothly. So wires should be routed such that the length is shortest except heater wiring. They shouldn't be bound. They shouldn't be bent at right angles. The leads of the components shouldn't be bent at right angles, either.

I was satisfied with this amp at first. What I liked most was its very low level of noise. No noise was heard. And I was fond of its soft tone that is typical for tube amps. However, the tone was gradually getting on my nerves. I became dissatisfied with this amp because its sound was somewhat misty and not clear enough. I made up my mind to improve it. I have done so three times.

By the way, I have experienced a trouble concerning soldering. I once used an amplifier manufactured by a prestigious audio maker in my subsystem. Its soldered joints were all degraded by a time when it was 20 years old. It was impossible to repair the amp after that.

The sound quality of MA-201 has been improved substantially through the three refinements. But it still has a shortcoming. It is the bad channel separation due to the anode voltage decoupling circuit that is common between the left and right channels.

The fuse was blown several times in a short period, so I decided to repair and refine MA-201. The refinements were as follows:

The step-C was dramatically effective. Though the tone of MA-201 had been misty and blurred, it turned to be clear and dynamic. This success made me attach greater importance to the short lengths of wires than to the looks of wiring. From then on, I keep it in mind to shorten the wires as long as possible.

After the step-D was done, the output power became 30W+30W.

I decided to perform the step-G to other NOBODY-branded amplifiers. Because FG is connected to SG (signal ground) at one point in each amp, every amp has the same level of SG. When amps are connected (for example, the preamp and the network are connected), currents other than the signal current do not flow through the ground line of the interconnect cable. That's an advantage in sound quality.
In theory, the amp of which potential of FG is the middle of hot and cold is not polarity-sensitive. But when I actually reversed the polarity of mains, the sound quality was degraded . This happens probably because the potential at the primary winding is inconsistent between equipment. Now all the equipment in Gaudi is connected to mains in the right polarity.

By the way, one of the output transformers was broken by my mistake during the measurement after those modifications. The mistake was that I disconnected the load and connected it again while the power was on. I was at a loss thinking it is impossible to get Lux OY-15 any more. Then I collected myself and went to Akihabara to look for the transformer. Though I didn't expect a new one and was looking for a used one, I was lucky enough to find a new one. That one was manufactured under license of Lux by a transformer maker that used to be a subcontractor of Lux corporation; it was Lux-branded. I was relieved. I might have discarded MA-201 if I couldn't have got the OY-15.

I replaced the push terminals of output with a terminal block with soldered parts. I removed the input subsonic filter too. There was no room for the terminal block to be mounted on the case. I made an aluminum sub-panel for it.

After the metalwork, I mounted the terminal block and soldered the speaker cable to it. The tone changed slightly to be softer; I felt the presence of the amp itself was weakened. I interpret that the distortion has been reduced.

MA-201 was aging. I decided to replace all the vacuum tubes and E-caps with new ones. A number of wires had to be re-wired for the maintenance. I took this opportunity to change the circuit a little.
MA-201 used to have the AC and DC balancers. I decided to remove those balancers to simplify the circuit. To my experience, I knew slight imbalance does not affect the quality of sound. "Things that seem unnecessary should be removed" is my recent motto.
After all, a variable resistor had not better be used in a path through which both DC and AC (signal) currents flow, because DC current degrades the quality of the contact point.
I carried out other miscellaneous improvements, and drew a new schematic.
[New schematic (MA-201_Design.pdf)]

When I purchase vacuum tubes, I preferably choose currently manufactured ones. But 6AU6A and 6FQ7 are obsolete, so chose ones manufactured by Toshiba decades before, which were sealed and looked unused. For the output stage, I purchased two pairs of JJ EL34 and two pairs of Electro-Harmonix 6CA7EH. I chose the latter after a listening trial. I keep JJ as spare tubes. For the power supply, I bought SOVTEK 5AR4.

The additional components were all high quality ones: the resistors of 1W or larger were metal oxide film type, the other resistors were Taiyohm, and the E-caps were Unicon. Taking this opportunity, I also replaced the coupling capacitors with ASC polypropylene type. The reason why I chose ASC was its size. The smaller components have advantage on mounting, and look vibration-proof (though this hasn't been proved). Whenever I wonder which component is better, I choose the smaller one.

I believe the sound quality was a little improved. Unfortunately, I could not to add large capacitors because there was no room for them in the case. So I was unable to separate the decoupling circuit into two. It is still common between the left and the right channel. Channel separation is still low (40dB@1kHz). This is a problem to solve in the future.