This page Introduces the audio system Gaudi II, which is the main subject of this website, and its system design.
For further details of the system design, see this page. 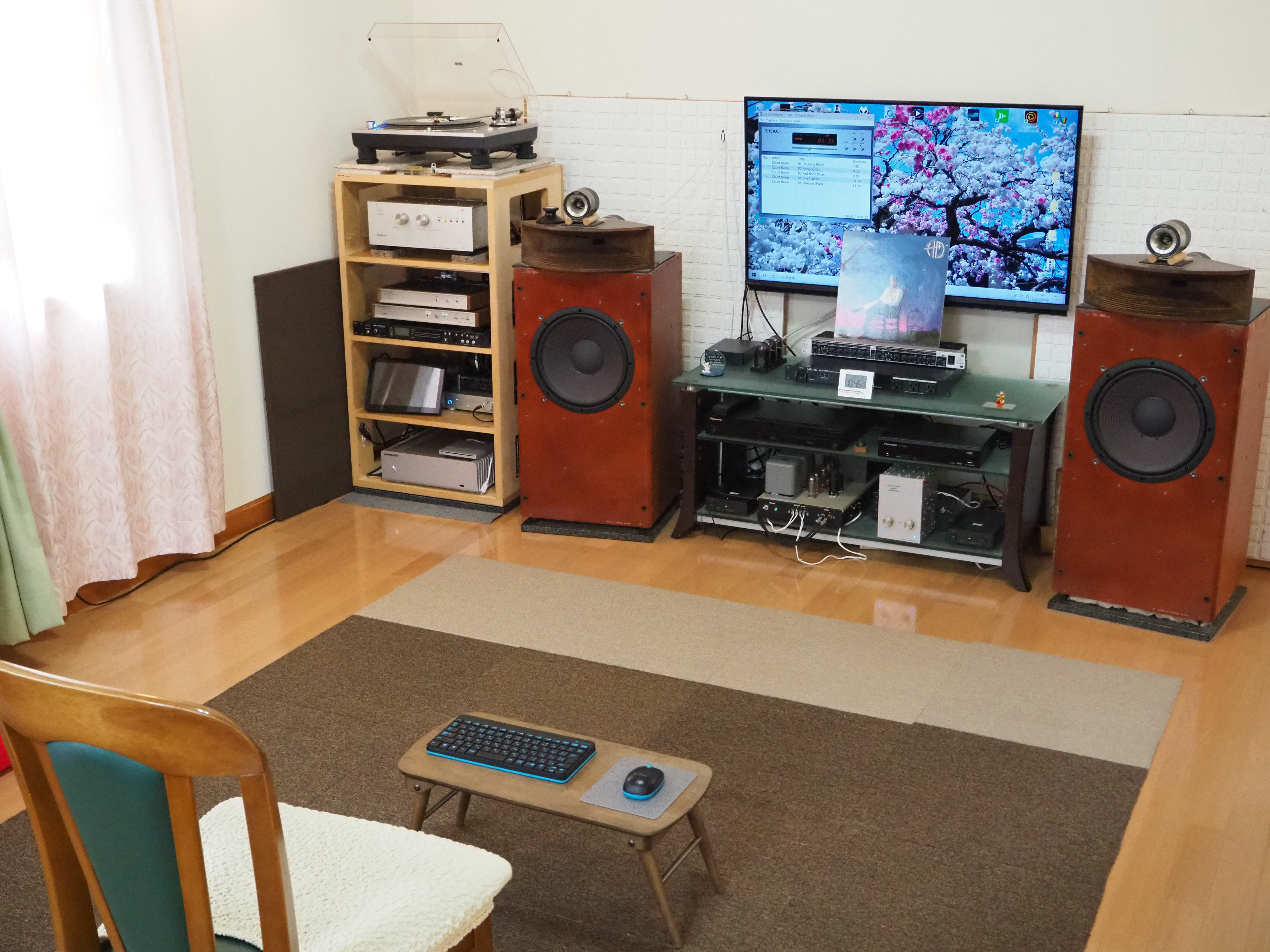 Gaudi II (Gaudi Ver.2) is the improved version of Gaudi.
Gaudi is an audio system I designed at age 17 in 1974, kept building for many, many years, and completed at last in 2015. It is a triamplified system using horn-loaded tweeters and squawkers.

This system configuration is so good even today. As a matter of fact, I believe it is still ideal, because I can't find better solution.
But the system design of Gaudi is too rough. And I have learned from my experience that it has some shortcomings. I am determined I should re-design it in more detailed way in order to establish my ideal audio system.

[2021/02/18 added]
I've added a new concept to Gaudi II, "Producing a cozy atmosphere", while seeking the utmost sound quality.
I hope Gaudi II to be an audio system such that its existence gives off a cozy atmosphere even without playing music and makes me feel like listening to music. That feeling leads to higher sound quality (so-called placebo effect).
It is a supreme bliss for me to listen to the best music in the best sound quality in my cozy room. It is no doubt an earthly paradise! I wish I can build up my Gaudi II to be an audio system that can create the paradise in my room.

Origin of the Name

Gaudi was named after the great architect, Antoni Gaudi (1852-1926). His masterpiece, Sagrada Familia, could not be completed before his death, and his successors have been building it thereafter. It is still under construction.
I didn't expect I could complete my audio system by the end of my life. It's just like Sagrada Familia, isn't it? So I named my audio system Gaudi in 1999 (until then it had been nameless).

The Goal of Gaudi II

[2021/02/02 Revised] {This section was complicated and difficult to understand. So I re-wrote it. The point is the same}

Basically, the goal of Gaudi is 'hi-fi' (high fidelity). The term 'hi-fi' is almost dead language in Japan. So it may be better to call it 'Hi-Res' (high resolution). It's a more contemporary expression.

I believe that the hi-fi system is the most suitable for music appreciation, because it re-produce the sounds musicians created as they are.
It's not my hobby to modify the original sounds by using non-hi-fi audio components. I want to listen to music, not to listen to sounds of audio equipment.

It's rather difficult to define 'hi-fi'. In short, hi-fi means not adding anything to the original audio signals, nor subtracting anything from the original, nor changing the original at all. In other words, to suppress noise, distortion and deviation in frequency response to the lowest possible levels.
[continued]

[2021/02/06 Revised] {It's been nearly four years since I designed Gaudi II in 2017. I learned many things and revised the system design a few times during that period. Now the current version is Ver.2.3, and many things have been revised. So, I re-wrote this section to simplify it. Here is the version history}

Ver.2.0: Improved version of Gaudi. All the amplifiers in the system are newly designed semicondutor amplifier (Nov. 2017).
Ver.2.1: PC is used as DAP. It's also used as measurement instrument (May 2018).
Ver.2.2: DVCS is introduced to improve the system-level SNR and dynamic range (Oct. 2018).
Ver.2.3: Digital crossover network and power distributor are employed (Jan. 2021).

The main source is vinyl disc (analog disc; AD) as with Gaudi. It's simply because the most of my favorite albums are ADs released in '70s. I was a teenager in '70s, and the '70s sound still speaks to my heart. Some of LPs in '70s are so good in sound quality.
Other analog sources than the AD (cassette tape, FM radio, etc) are not supported in Gaudi II. Their sound quality is not so good.

I like not only oldies but contemporary music. So, I stick to digital sources too. A PC will be used as a player, and all the media that can be replayed with PC will be supported (music files including hi-res, CD, DVD, Blu-ray disc, Internet radio, etc).

For the details of the system design, click the following link:
[Details of System design]

The DAP, SONY HAP-Z1ES, has been replaced with PC audio subsystem that features OlioSpec canarino Fils9 and TEAC UD-301-SP/S.
The other components aren't changed.

The speaker system (SS-309A) has not been improved to Rev.B yet.
Tuning of the the room acoustics is still insufficient.

In July 2017, Gaudi II started its history by changing a part of Gaudi.
For details, please see the following page.
［History of Gaudi II］