I started considering Gaudi II (Gaudi Ver.2.0) in early 2012.
I was satisfied with the sound quality of Gaudi 70-80%, though, I wanted higher quality. I concluded it was necessary to change the system design for further improvement.

Differences from Gaudi were: (1) not to use vacuum tubes, (2) to use rechargeable batteries for power supply, (3) to make digital source the main source, (4) to make the system controlled with a remote.

The results of the study in 2012 are shown in the figure below.
[Concept of Gaudi II]

It was a rather drastic idea; to replace the preamplifier with a control center using PC motherboard and sound card, and to build a crossover newtwork (channel divider) using Texas Instruments' DSP evaluation board. In other words, both the control center and the network would be composed of digitil circuits. I intended to use a wireless keyboard and mouse instead of an infrared remote control.

I used to be a computer engineer and I was good at firmware design, so I came up with such an idea. However, it would be a never-ending project, because I didn't (and don't) have enough stamina to complete the system. 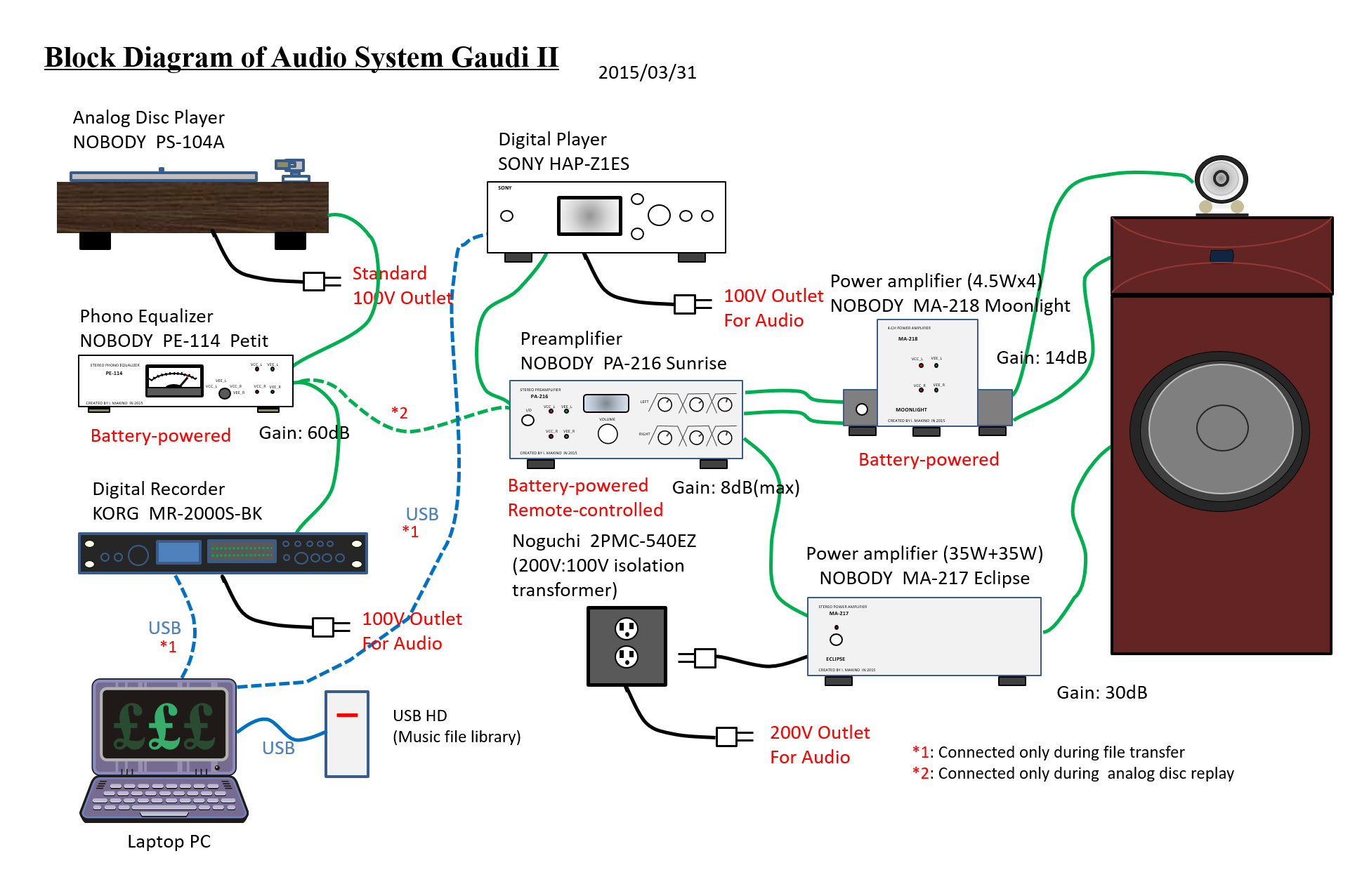 In order to improve the feasibility, I decided to make it more like Gaudi.

I decided to reduce the number of components by integrating the preamplifier and the network, and also integrating the tweeter amp and the squawker amp. I planned to use a general-purpose infrared remote control instead of the keyboard and mouse.

I planned to use rechargeable batteries as power supply for the phono EQ, the preamplifier and the tweeter/squawker amp.

Completion of System Design and Start of Building Gaudi II

As a result of further consideration in 2017, the system design turned to be as shown on the page "Gaudi II System Design".
I started building Gaudi II in accordance with this design. However, since it's difficult to change the whole system at one time, just as with Gaudi, I'm going to replace the components one by one to bring the sytem closer to the system design. 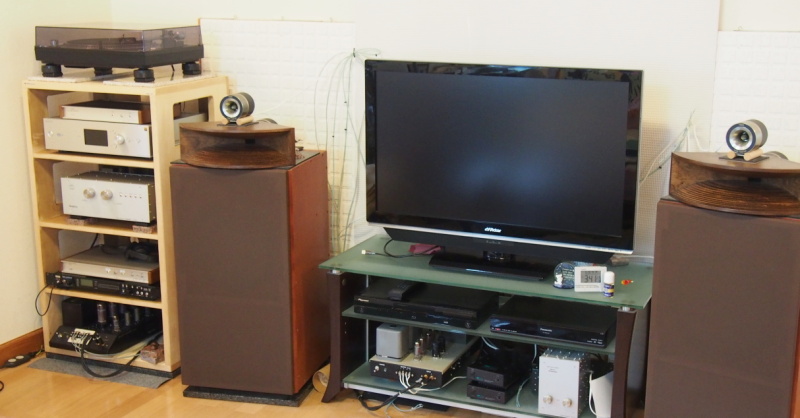 I finally designed and built an audio rack I was eager to build for a quarter century. The model number is AR-416 Air.
This audio rack is the first component designed and built for Gaudi II. With the introduction of this rack, I began calling my system Gaudi II (Gaudi Ver.2.0), although it is still far from the system design of Gaudi II.

As for the record player, I chose Pioneer PLX-1000.
My original player PS-104 became degraded after the many years of use. I searched for a good player to replace it, and found that PLX-1000 . I thought it was worth trying out because of its high price/performance ratio. I bought it.
I started using PLX-1000 before AR-416 was completed. The sound quality clearly improved compared with PS-104. I understood soon that this improvement was caused by the high anti-vibration performance of PLX-1000.

The audio rack AR-416 Air was not as good as expected at first, but with the addition of an insulator, it succeeded in blocking vibrations toward the record player almost completely in the band of 20Hz-40kHz.
The sound quality of the vinyl disc playback has been improved a lot. I was deeply impressed. It's a clean sound like when you listen with headphones (listening with headphones prevents acoustic feedback, so it makes the sound clearer). The sound image became more focused and localization became more accurate too.

On the other hand, I noticed hum coming from the left channel. It took me some time to find the cause. I finally found out that the cause is in the PLX-1000. The PLX-1000 is not supposed to use with an MC cartridge. They say that the shield near the output terminal is not good enough to prevent ham from mixing into the signal when an MC cartridge is used (even Pioneer admit this).
I was really disappointed. I was not attached to the PLX-1000 so much that I made up my mind to replace it. 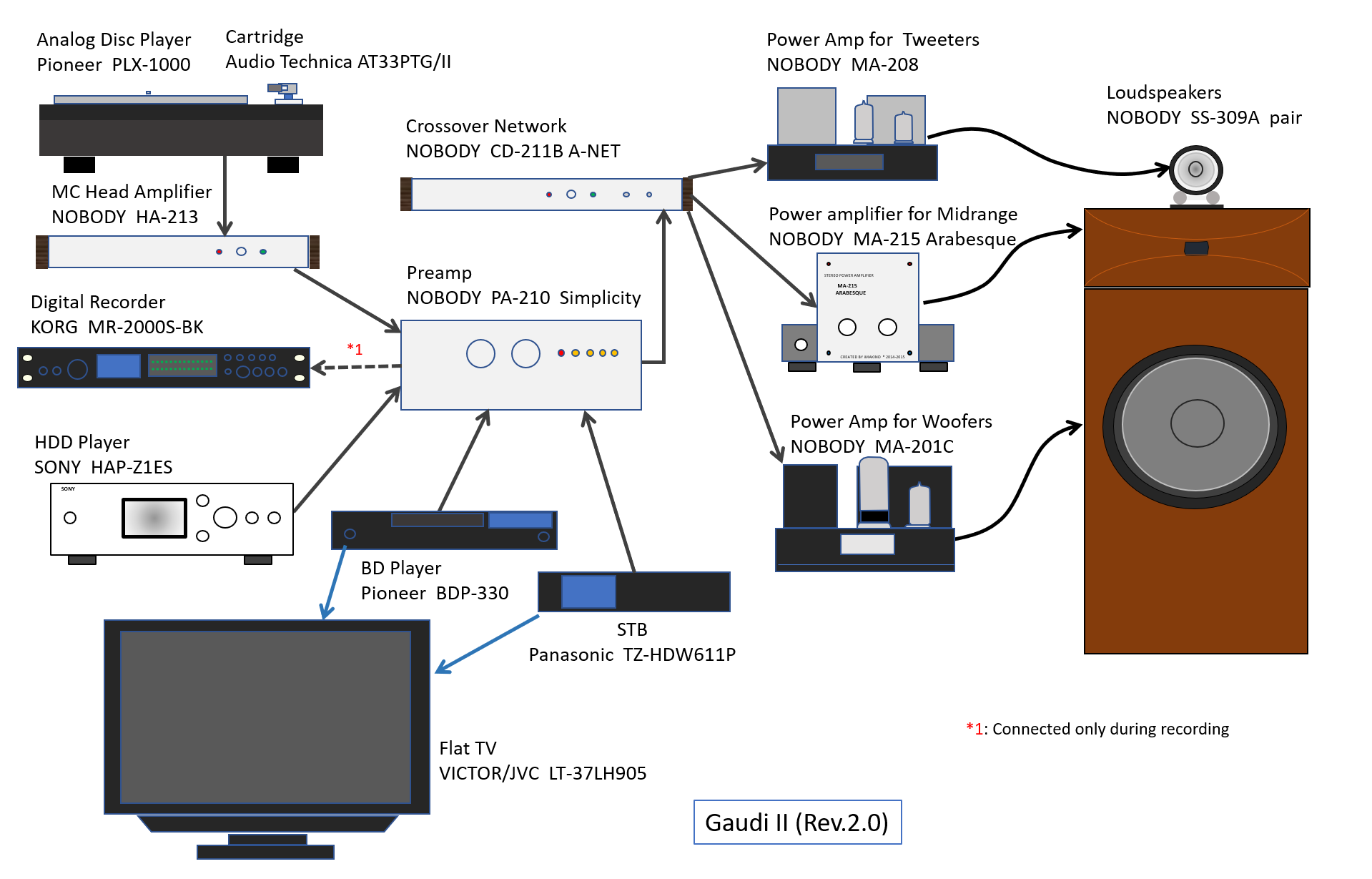 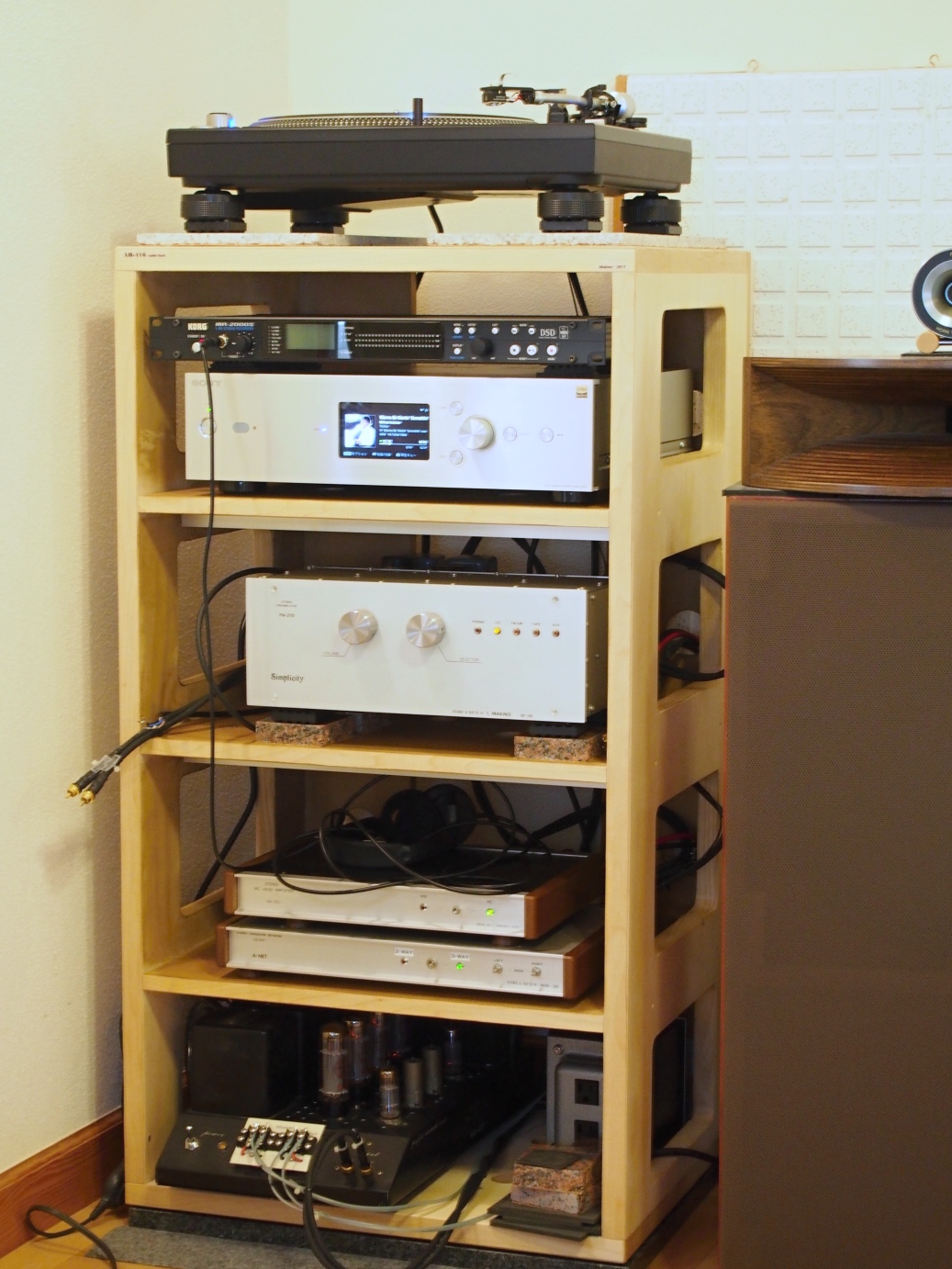 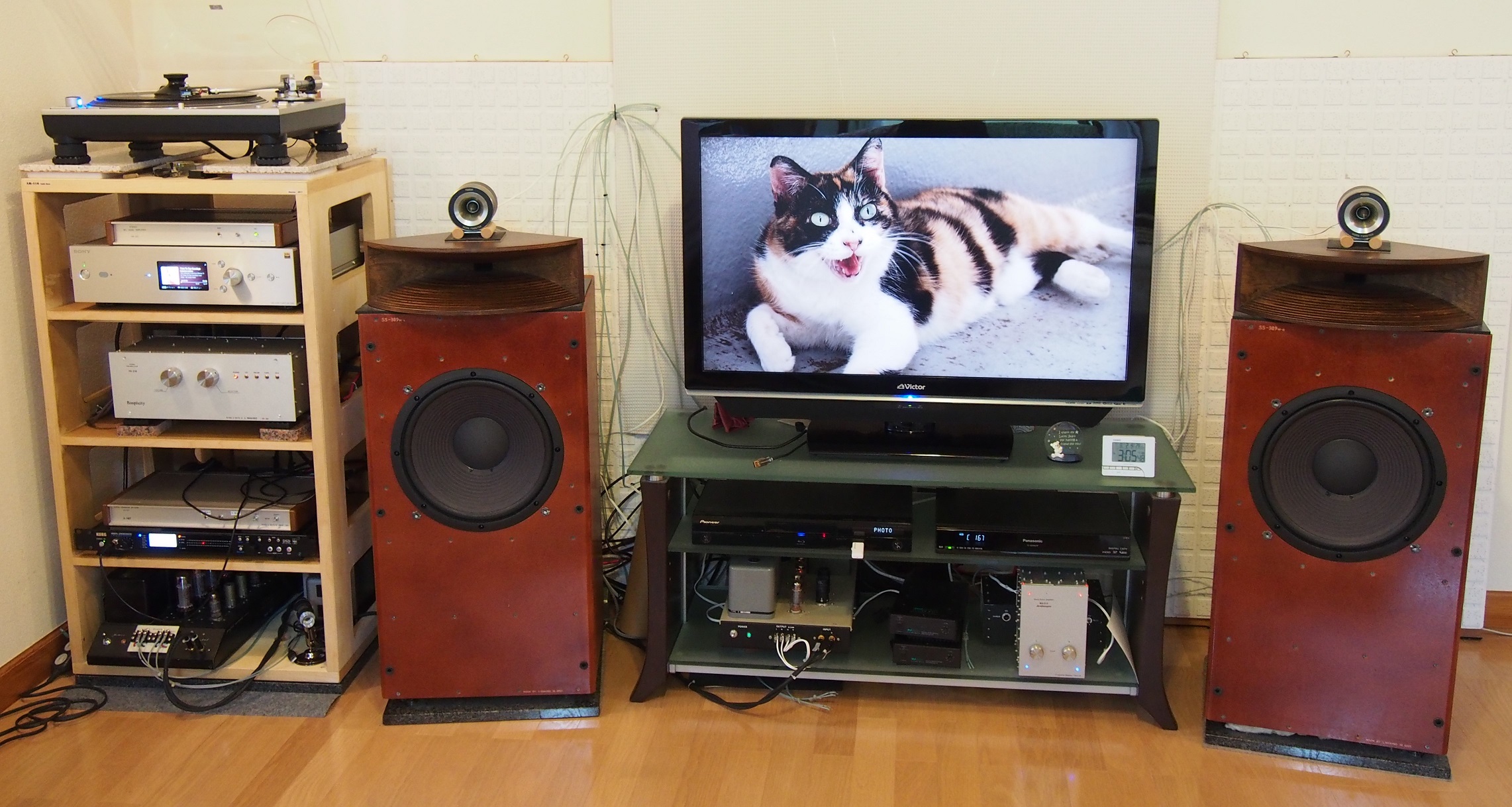 I quit using Pioneer PLX-1000 because of its noise, and replaced it with Technics SL-1200GR, which was just went on sale. Both are based on SL-1200, but I'm not a fan of SL-1200 in particular.
For the reasons for selection, please see the page "Commercial Products".

SL-1200GR is as expected as to the sound quality. Though I was a bit dissatisfied with its rather cheap looks and touch, I decided to continue to use it, because I judged it is suitable for Gaudi II for its high sound quality, compactness and user-friendliness.

The problem of hum was solved, and the sound became clearer. The difference in sound quality between vinyl disc and CD (music file of CD quality in the exact sense) has widened, and from then on I play only vinyls when I want to listen to my favorite music.
Consequently, I listened to only old analog recordings these days. But I am intersted in contemporary music too. I'm eager to improve sound quality of digital sources. 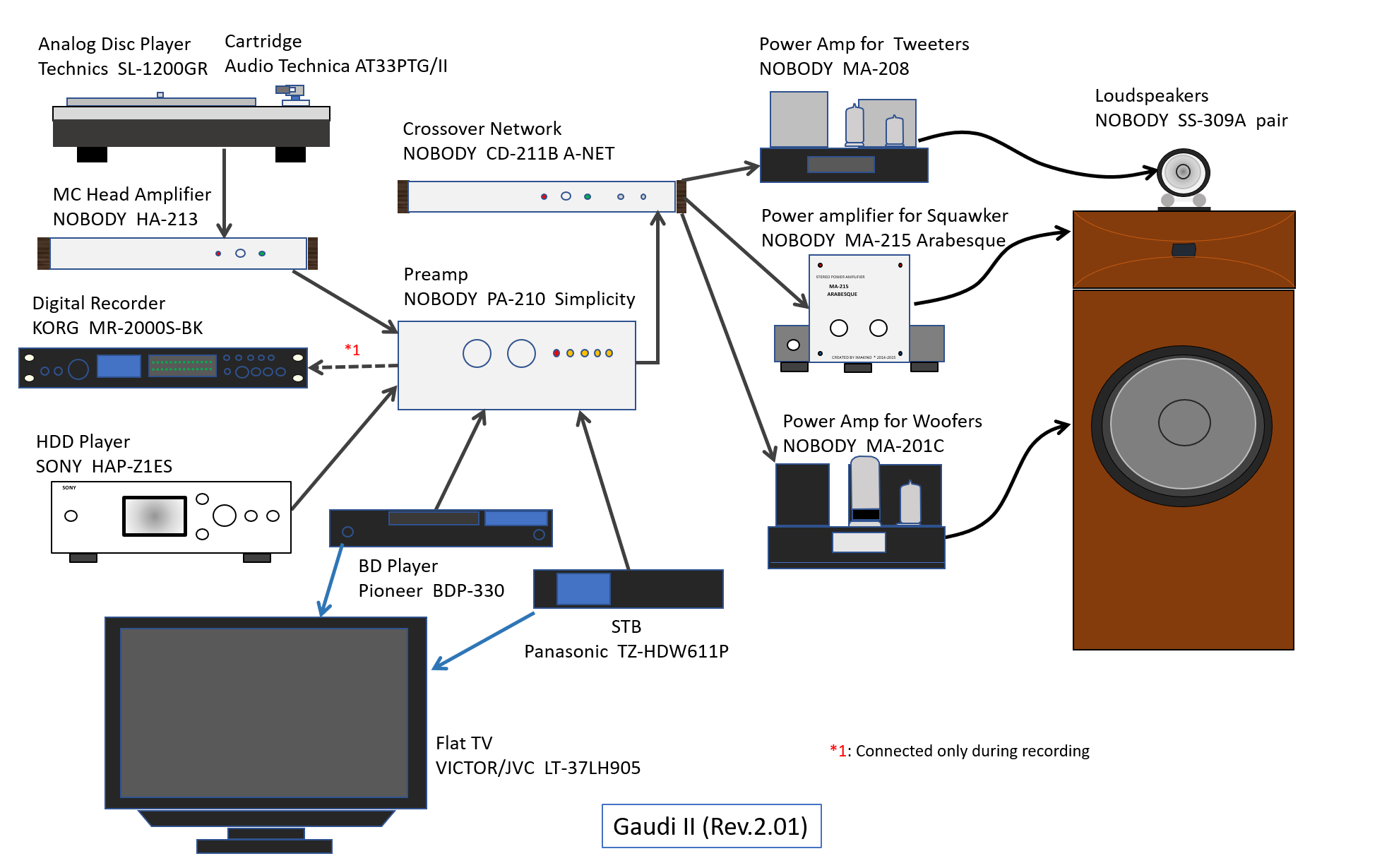 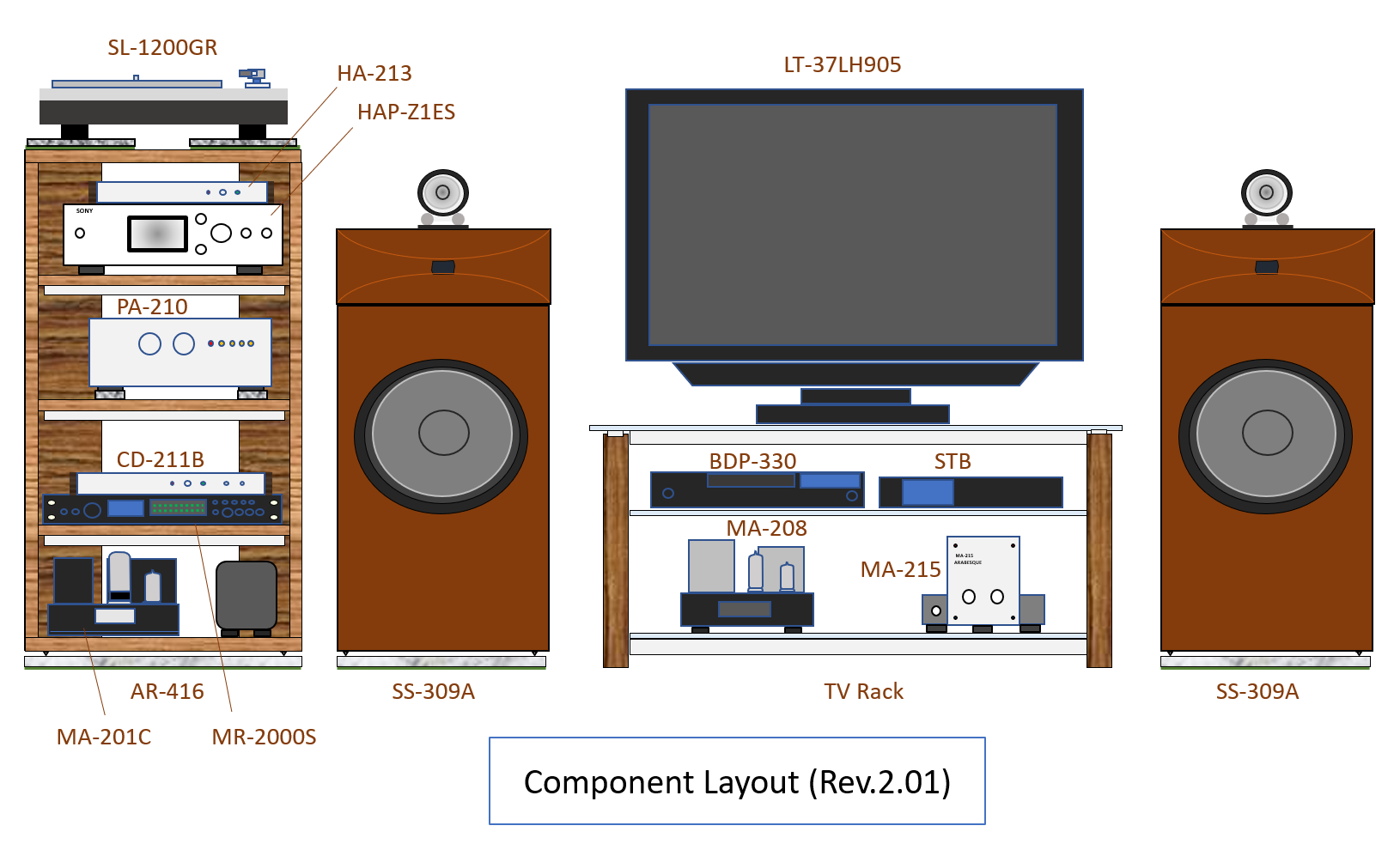 I exchanged the woofer amp from MA-201C, my self-built tube amplifier, to Flying Mole DAD- M100pro, Class-D amplifier. It's because I've decided not to use tube amps any more. 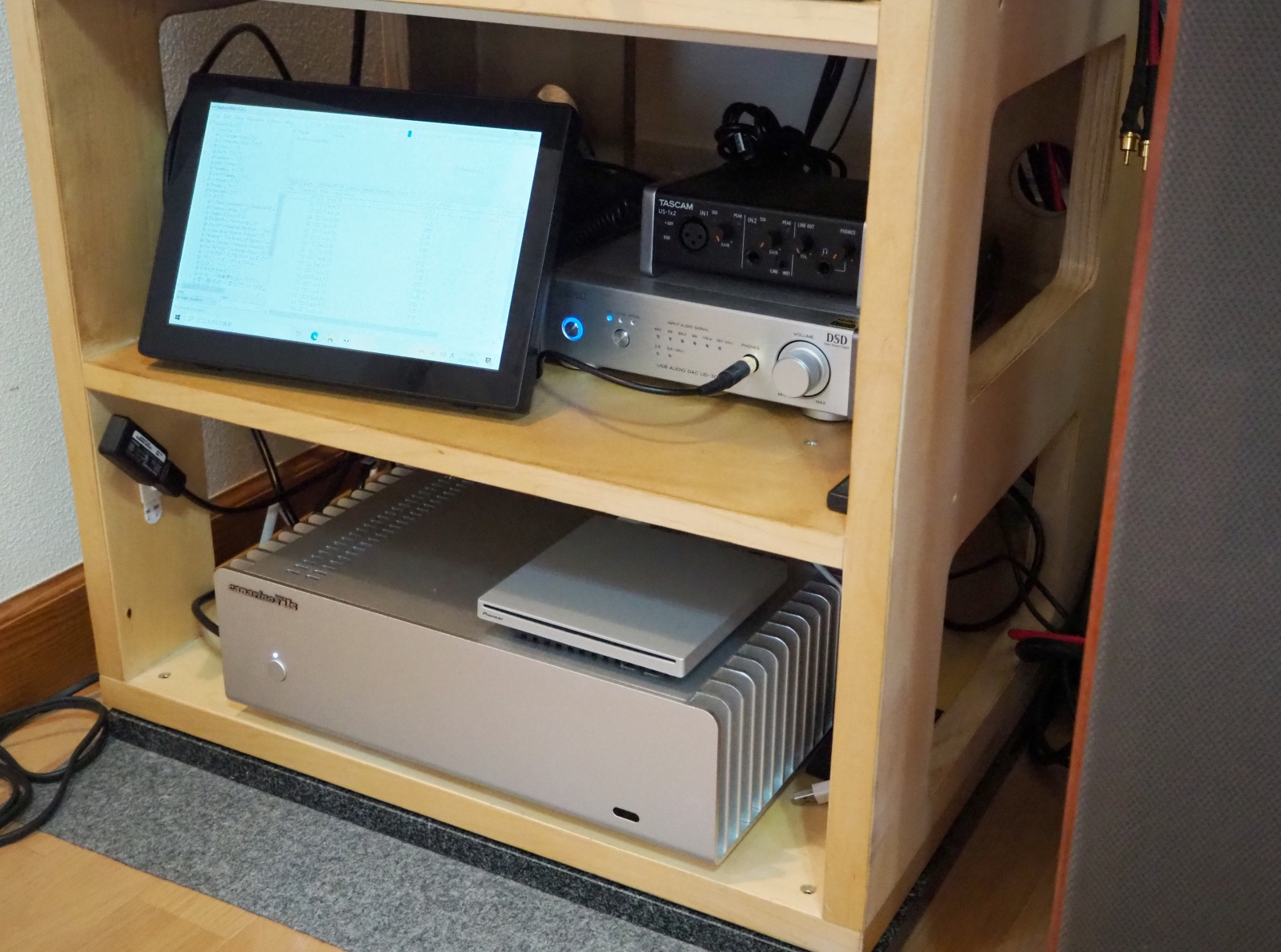 This is the current Gaudi II.

For the crossover network, I employed a manufactured one (Behringer CX3400) for the first time.
I made time alignment adjustment by utilizing the LOW DELAY feature of CX3400 and Tweeter Rack I made in a hurry for the loudspeaker SS-309A.

For your information, the history of Gaudi Ver.1, which is the predecessor of Gaudi II, is linked below: