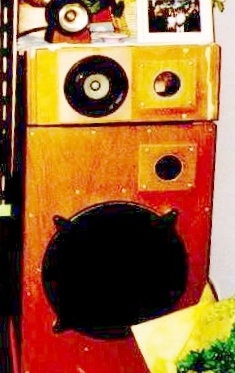 The following contents were copied from the page of SS-307 on my previous homepage 'Tonochi's Audio Room', and edited to fit in the new format.

I chose used loudspeaker units (LS unit), because I didn't have a deep pocket. So the range of the selection was limited.
As for the woofer, I had decided to use a 30cm (12 in.) woofer in the system design. I looked for used ones in a good condition. I happened to find a pair of Pioneer PW-A31 in a classified ad of an audio magazine (MJ). The ad said the pair was nearly new. The seller was an audiophile living in the same prefecture. I contacted him without hesitation and he agreed to sell them to me. I don't remember the price exactly, though, it may have been the half of the original price.
For the squawker, I chose Fostex FE106 Sigma (4 in. full-range) I had bought for another loudspeaker. Because I couldn't afford horn units at that time, though they were cheaper than today.
I employed dome tweeters instead of horn type, since dome type was a lot cheaper. It was a Technics. I forgot the model number. It looked like an expensive one. I bought them at a junk shop in Akihabara. I forgot the price too, though, it must be cheap. The specification was unknown, but I decided to use them, since tweeters with lower sensitivity than the woofer can be used in multi-amplifier systems.

All the LS units were replaced afterward for upgrading. I replaced the tweeters with long-sought horn tweeters. But I couldn't afford midrange horn units until I got ones for next loudspeakers (SS-309).
The final configuration was as follows:

I selected 21mm-thick lauan plywood boards for the enclosure material, because it was available at a nearby lumber shop and easy to cut. I didn't consider other materials.

Design of the Woofer Box

I designed a slit vent bass reflex scheme for the enclosure of the woofer (woofer box). The slit vent has high air resistance and damps resonate of the vent. I expected tight bass sound.

I designed the slit vent according to my "textbook", written by Japanese audio experts and edited by Dr. Takeo Yamamoto of Pioneer Corp (Ref-8).
Though dimensional error affects the characteristics of the slit vent more than those of ordinary pipe vents, I didn't care much about it.

Not to take trouble, I didn't paint the woofer box.

Design of the Squawker Box

I didn't take account of bass response since it is the midrange module, though the LS unit is full-range type. This enclosure is a sealed-box and relatively large for FE106 Sigma. A filling is stuffed to prevent standing waves.

The squawker box isn't painted, either.

I cut the plywood boards with a power circular saw I borrowed from my friend. I made the cutouts for the LS units with a padsaw. 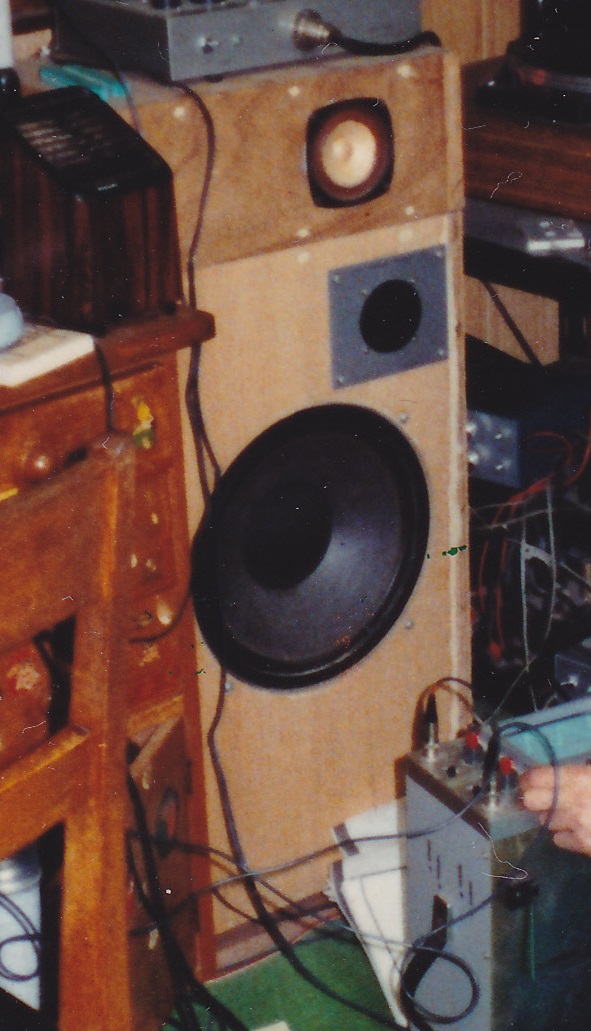 I was unable to check the operation of the bass reflex vent, because I didn't have measurement skill at that time. But I was impressed by its extended and powerful lows. I thought it was a good decision I chose the large woofer.
Thanks to the deep bass, Hard rock music became one of my favorite kinds, though I hadn't liked it until then. Especially, I was charmed by The Knack's My Sharona (FM air check).
There was one catch. The bass sound was dull. I think it was caused by poor sound quality (SQ) of PW-A31 around the cross point. The guy who sold it to me also said he wanted to sell it because he didn't like its dull sound.

I installed SS-307 in the living room after I got married. My wife complained a lot about its shabby looks and told me not to place junks like this in the living room.
I was determined that I would build better looking loudspeakers.

The dome tweeter was replaced with Fostex T925 (horn tweeter).
T925 was designed to be placed on the top of the enclosure. I did so.
I left the dome tweeter on the woofer box as a blanking plate. I removed the wire for the tweeter only.
SQ was significantly improved. Gaudi became a hi-res system just like a multi-amplifier system.

I replaced the woofer when one of Pioneer PW-A31 was broken.
At that time, only Fostex and Technics produced 12" woofers among Japanese audio manufacturers. I chose the most inexpensive one: Fostex FW305.
The frame diameter of FW305 was smaller than the diameter of the cutout for PW-A31. So I made sub-baffles for FW305, and attached them on the baffles of the woofer boxes. The sub-baffle covered the slit vent. I fixed a pipe vent at the position where the dome tweeter was mounted.
SQ was improved by a notch. Bass was no longer dull.

I wanted to improve SQ more. I replaced the midrange units.
I had two pairs of full-range units that I happened to spot at an audio shop at Akihabara District and bought when I went there to purchase audio parts. They were Fostex 6N-FE103 and 6N-FE88ES. They were both limited-production.
First, I tried 6N-FE103, of which dimension is exactly equal to that of FE106 Sigma. But I felt SQ was worse.
So I decided to use 6N-FE88ES. Because its frame size was smaller than the cutout for FE106, I made a sub-baffle and attached it on the baffle of the midrange box.
I took this opportunity to add a vent to the midrange box. Now the midrange module could be used as a full-range module too.
SQ was apparently improved. 6N-FE88ES had high SQ in high band as if it could be used as a tweeter. This fact may improve total SQ.
In return for the good SQ, the looks of SS-307 turned to be worse and worse. The multiple upgrades made it so patchy.