Current version of Gaudi II: Ver.2.1
Ver.2.03 of Gaudi has been modified based on the system design Ver.2.1.
The old amplifiers built for the old Gaudi system (Ver.1) are still being used, but I regard amps as less important components than the others. So, I decided to raise the version to 2.1.
For the history of Gaudi II, click here.

I repleced the DAP, SONY HAP-Z1ES, with PC audio, following the system design Ver.2.1. The PC audio subsystem features a silent PC, OlioSpec canarino Fils9, and a DAC, TEAC UD-301-SP/S.
The PC audio is an impotant component for expanding Gaudi II to an audio/visual system.

The PC audio is used for not only music replay but also replaying visual sources. Besides, some measurement features like oscilloscope will be installed.
By using headphones, the PC audio subsystem can be used as a small audio/visual system without the other Gaudi II components.

I had been considering PC audio since 2004, but SQ (sound quality) didn't reach the level that I am satisfied with. In 2019 and 2020, I upgraded my audio subsystem in the study room, which uses PC audio. At last, I was satisfied with SQ of PC audio.
In January 2021,I finally made up my mind and began building the PC audio subsystem for Gaudi II. I took me as long as half a year to complete it.

For details of the PC audio, please refer to the topic "Introduction of PC Audio".

The amplifiers are still the same as Gaudi Ver.1. But I've changed the version number to Ver.2.1 because the amplifers don't affect the total sound quality so much compering with the other components.
The BD player has been removed from Gaudi II. The STB, Technicolor BD-V570, has been replaced with Panasonic TZ-LT1500BW, because BD-V570 was instable when it was connected to PC via Wi-Fi.

The TV is fixed on the wall behind Gaudi II instead of being planced on the TV rack.
PC radiates far more amount of EMI than audio equipment. So, the PC is placed on the bottom tier (1st tier) of the audio rack (AR-416) to reduce EMI to devices that include analog circuits. The peripherals are placed on the 2nd tier.
The crossover network (CD-211B) and MC head amp (HA-213) are placed on the DAR (MR-2000S). This layout is not so good because CD-211B and HA-213 are not designed to be placed on another audio device. I will change the layout when I replace the crossover network in the near future.

The keyboard and mouse are set on a very small table and the table is set in front of the listening position. The reason I chose the very small table is that it doesn't interfere the sound waves from the loudspeakers. That prevents acoustical distortion.

The following figures show the layout of the whole system.
No change has been made from the previous version (Ver.2.03) except the small table.
Since the system-level tuning hasn't been made yet, this is a tentative plan.

The cables used in Gaudi II are as shown in the table below.
Quad-core shielded wires are used for the first time to connect the DAC to premap.

I've been making the cables without elaborate designing; no drawings, no manuals. I've chosen the parts without full consideration. This way could cause a problem. Actually, I've experienced some problems concerning the cables.
I reflected and have changed my way. I'll give consideration to choose parts and make drawings and assembly manuals before making a cable.
As the fisrt step, I designed the LINE cable connecting DAC with preamp, and assembled it following the drawing and assembly manual.

The wire I've chose for the LINE cable is shielded quad-core wire, Canare L-4E6S, because it has high performance (low noise, low signal loss). Besides, it is inexpensive.
The plug I chose is Canare F-10. It is cheaper than Neutrik and Tomoka, though, it is of high quality.

As a result, the new LINE cable is much cheaper than the previous ones.

For the details of the cables, I'm going to write on the page, "System Design".

The first cable I carefully designed
I gave full consideration to appearance, too 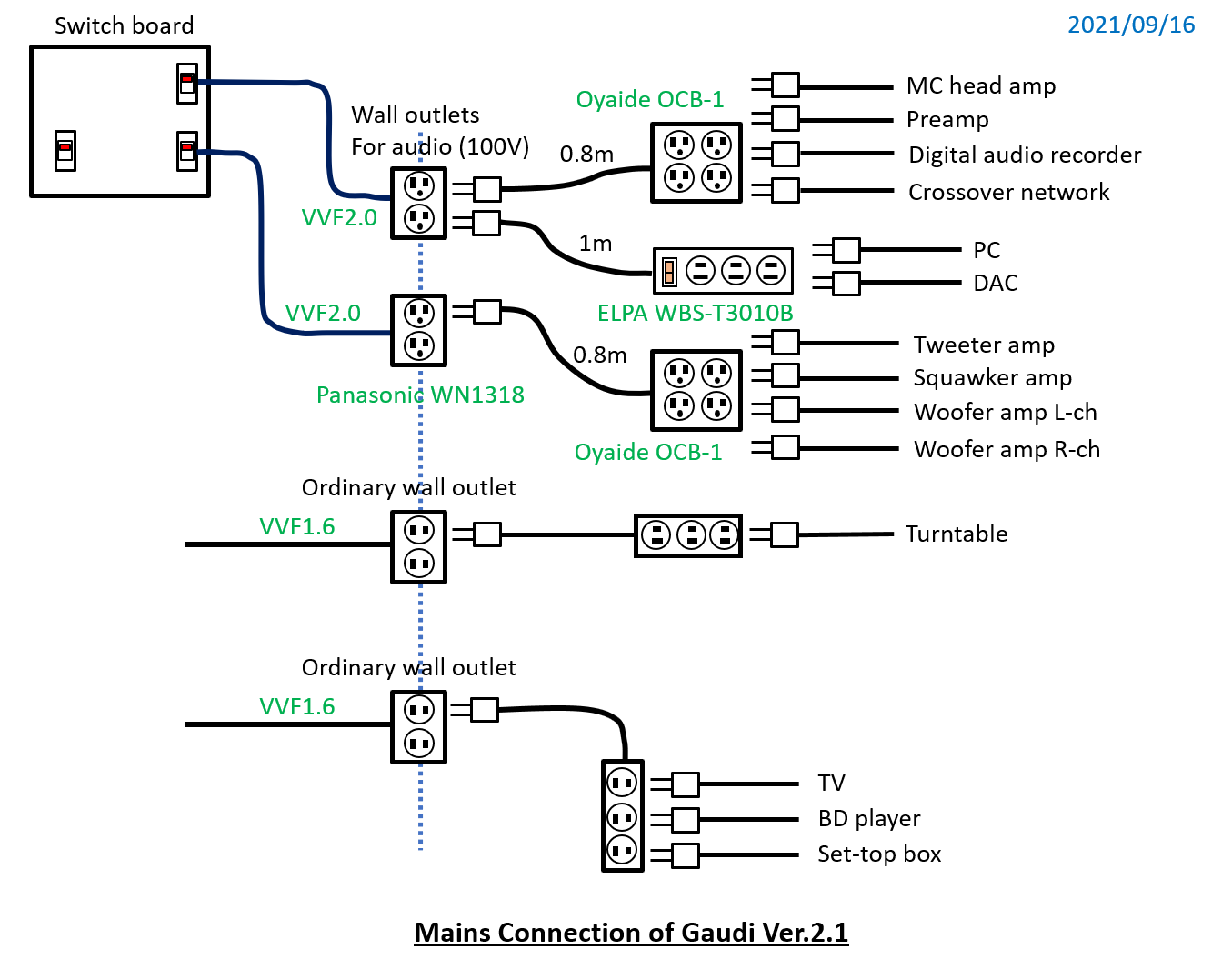 The figure on the right shows the AC power connection (click to zoom up).

The three-outlet power strip with switch has been added for PC audio. The standby power consumption of the PC (canarino Fils9) is substantially high, so AC power should be shut off by the switch of the power strip.
The switch also turns on/off the DAC.

The PC audio, which has been a long-term pending issue, has been finally installed to Gaudi II.
The functionality and user-friendliness could be better, as I expected.
As for SQ, the PC audio is a bit better than the previous DAP, SONY HAP-Z1ES. I am satisfied.

However, the SQ of the PC audio is still not as good as analog source to my ears.
I'll continue to research for digital audio that excels analog.

For the details of my review of the PC audio, refer to the supplemental info, "Introduction of PC Audio". 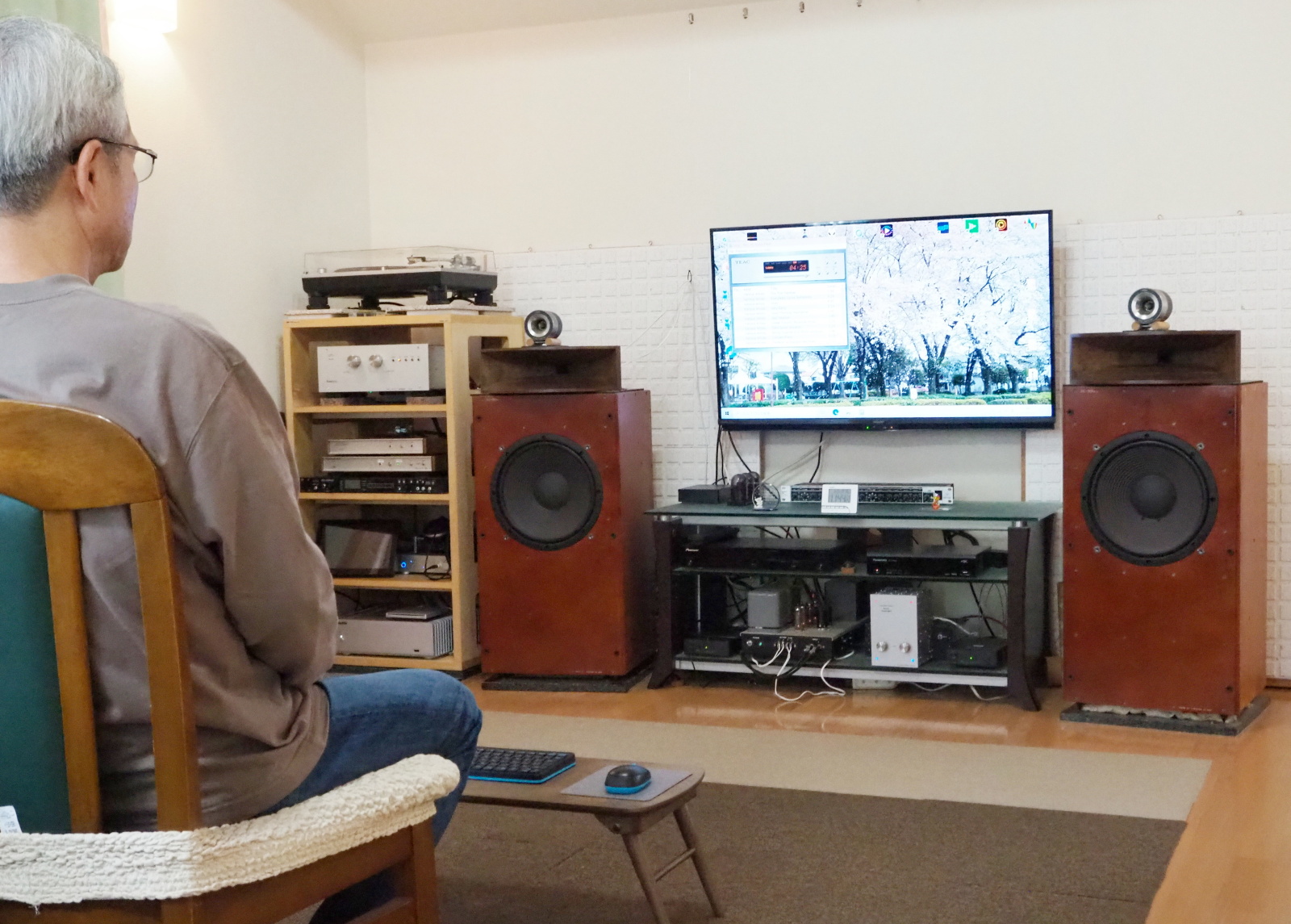