While continuing to use Gaudi for many years, I have made various improvements. However, some problems remain unresolved, and those cannot be solved unless system design is changed. This page explains those problems. Solving them is given the highest priority in the system design of Gaudi II.

At the time of designing Gaudi (1974), I did not emphasize the damping factor (DF). It is because the following theory was convincing at that time: DF of 10 is enough, and DF of 100 makes no difference compared to DF of 10.
In the system design of Gaudi, all the amps but the network were intended to be tube type. That's because I thought semiconductor amplifiers were technically difficult to design and build for amateurs. Since it is very difficult to achieve high DF with a tube amplifier, I decided not to consider DF.

The theory that DF affects the characteristics of bass has been an accepted one. However, in fact, the vibration system of many woofers is mechanically damped enough, and the DF of the amplifier does not affect so much. I think that you don't have to care about DF unless you use a low-damped loudspeaker unit like Goodman Axiom 80.

From my own experiences, now I consider DF is more influential in the high frequency range. The human ear is sensitive to distortion in high frequencies.
If the DF of the tweeter amp is low, back electromotive force (back EMF) is less absorbed and distortion increases.
In a multi-amp system, since the power amp and the loudspeaker unit are directly connected, the effect of the high DF amplifier can be felt more clearly than in a mono-amplifier system.

I tried to prove my theory by measurement.
The figure below shows comparison of a low-DF amp (MA-208) with a high-DF amp (MA-215). MA-208 is a tube amplifier and its DF is 8, while MA-215 is a chip amp and its DF is 650. Each amp was connected to the tweeter (Fostex T925A). The input was one cycle of sine wave of 12.5kHz. The output of the tweeter was picked up by a microphone placed at the listening position.
The two curves look like almost the same, so I can't say this data proves my theory. But even 1% distortion makes the waveform distorted very slightly. More precise measurement may indicate that low DF causes distortion.
An overshoort and ringing appeared in the waveforms, but I realized afterwards that it was caused by the network (CD-211B). Its high-pass filter was not stable enough. Moreover, there were some shortcomings in my measurement system; the frequency band of the microphone (ECM8000) is 20-20,000Hz, and it is not wide enough to observe waveforms of 12.5kHz of sine wave; RF noise was generated by the microphone amp (Scarlett Solo G2). I need to improve my measurement system .

Gaudi's frequency response is not flat. In fact, it is quite uneven.
I can't sense any peaks/dips with my ears, but I get disappointing data every time I made a measurement.
However, one of my readers gave me an advice that it would be natural to have peaks/dips in raw data. He said most of frequency response curves on manufacturers' catalogs are deliberately smoothed in order to show them as a smooth curve.

I found one of the reasons for the occurrence of the sharp peaks/dips in my textbook (ref #8) that I've been referring to since my youth.
The textbook says that unadjusted time alignment will cause sharp peaks/dips in frequency response. In other words, the sound waves from each LS unit should reach the listening position at the same time. Otherwise, sharp peaks/dips will occur.
This problem is mentioned below.

I guess another reason is standing waves in the room.

One more problem; within the area of the squawker (800-6800Hz), the response declines as the frequency increases.
This is because of the characteristics of the squawker Fostex D1405 + H400.

The figure appears terrible, but I don't feel the response is not flat. Even if comparing with headphones, I don't feel any problem other than slight weakness of treble. To make sure, I asked some friends of mine to check it, and they said that there was no particular unnaturalness.
The overshoot and ringing of the tweeter mentioned above might compensate the low sound pressure in the high frequency range.

Some deep dips can be seen in the frequency response of Gaudi. That's probably because standing waves take place in the room.
My house is high-insulated, high-airtight housing, so there is no opening through which the sound escapes. The living room where Gaudi is installed is extremely live. Although measures to some extent have been implemented so far, full-fledged measures are now to come.

I have implemented some countermeasures I came up with. However, they weren't ones based on measured data but on intuition.
In the first place, I don't have measurement skill to figure out what is really a problem. Now I am studying acoustic measurement. Since I already have two measurement instruments (as of Sept. 2018), I'll brush my skill up with them.

Although I haven't had expertise, some of the countermeasures have improved the room acoustics.
The most effective one is the sound absorbing panel installed on the half wall facing the loudspeakers. Before setting up this panel, the sound image didn't focus and the localization was unstable. If the stereo imaging is unstable, one tends to suspect that there is something wrong with the loudspeakers, but I learned that the performance of the room is more important than that of the loudspeaker.

The next was the self-made acoustic panel set behind the loudspeakers.
For other measures, effectiveness is not clear.
In the future, based on measurement data, I am planning to implement effective measures without much cost. 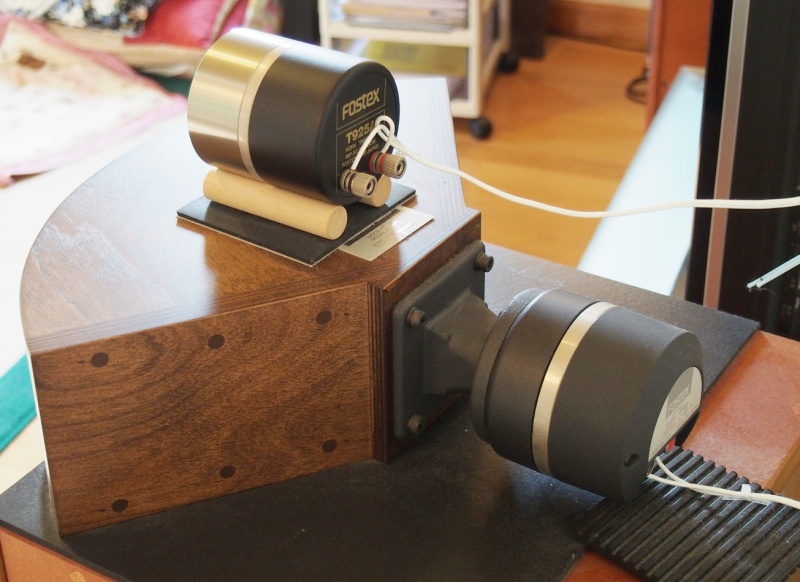 The distances from each LS unit to the listening position must be equal. Sound speed is slow in a way, so when the distances are different, the arrival times of sound waves to the ear of the listener will be different for each LS unit. Especially, it becomes a problem in the high frequency range where the wavelength is short.

Originally, I adjusted the time alignment by shifting the position of the tweeters back and forth. However, after changing the squawkers to a horn type in 2012, this method can no longer be applicable. It is because the squawker driver is in a position that is retracted considerably backwards and you cannot withdraw the tweeter to that position.

It is necessary to add a time alignment adjustment function to the channel divider (network). I will do it with Gaudi II.