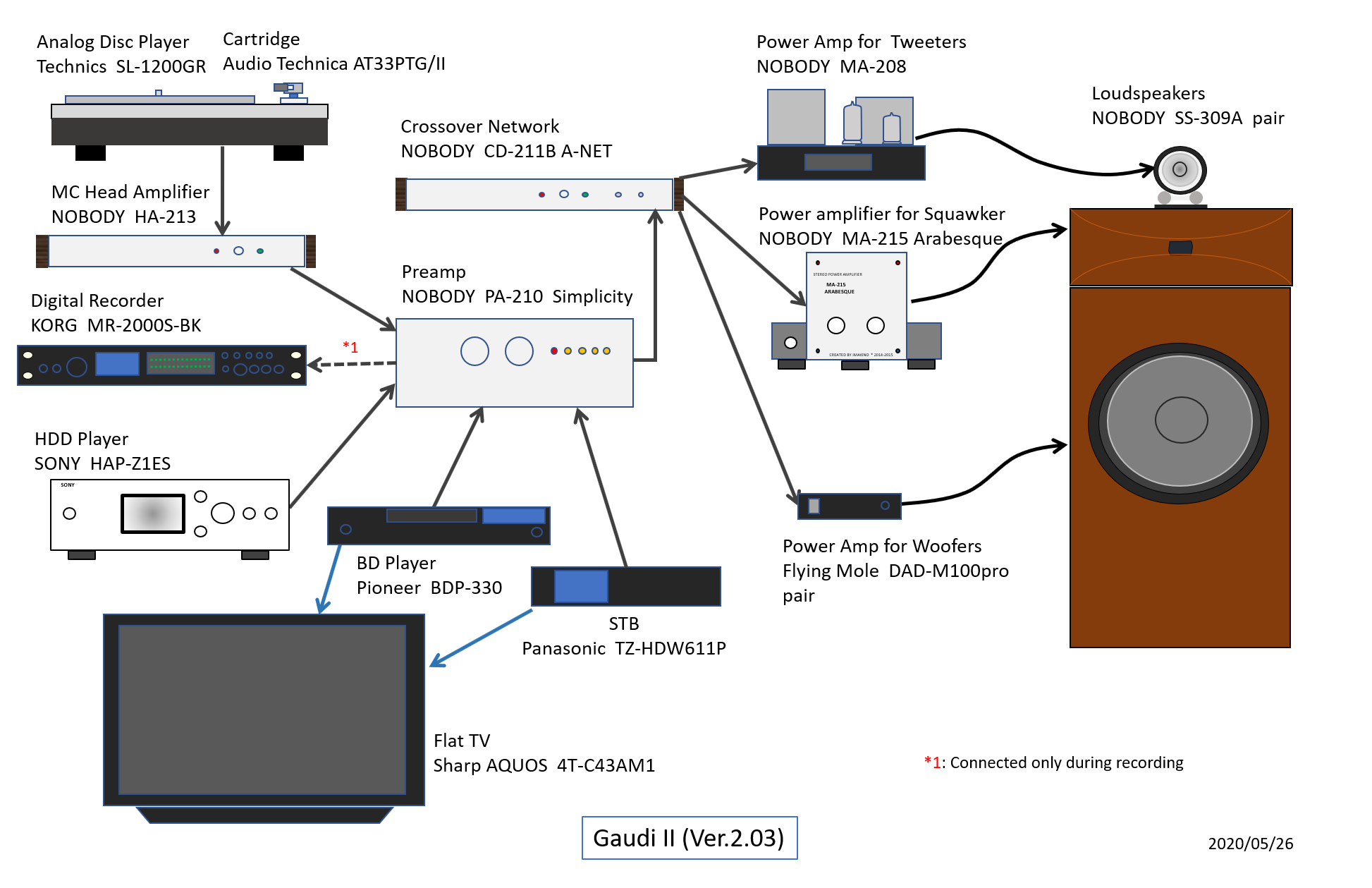 For details of the new TV, please refer to the page "Commercial Products".

There are no changes to the other components from the previous version (Ver.2.02). 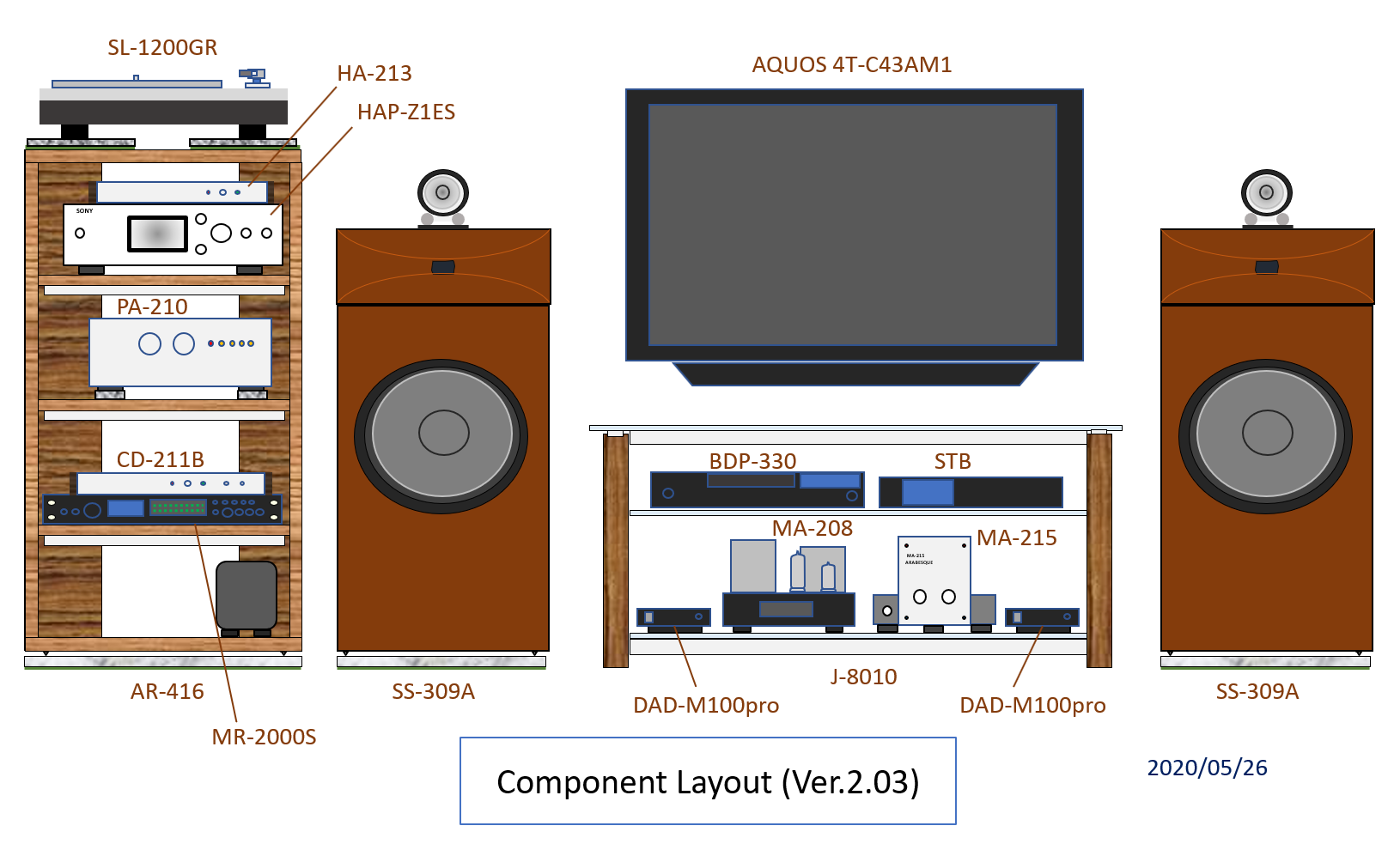 The TV is fixed on the wall behind Gaudi II instead of being planced on the TV rack.
The distance between the loudspeakers and the TV has been widened. This contributes to reduce acoustical distortion.

The following two figures show the layout of the whole system.
No change has been made from the previous version (v2.02).
Since the acoustic design hasn't been made yet, this is a tentative plan. 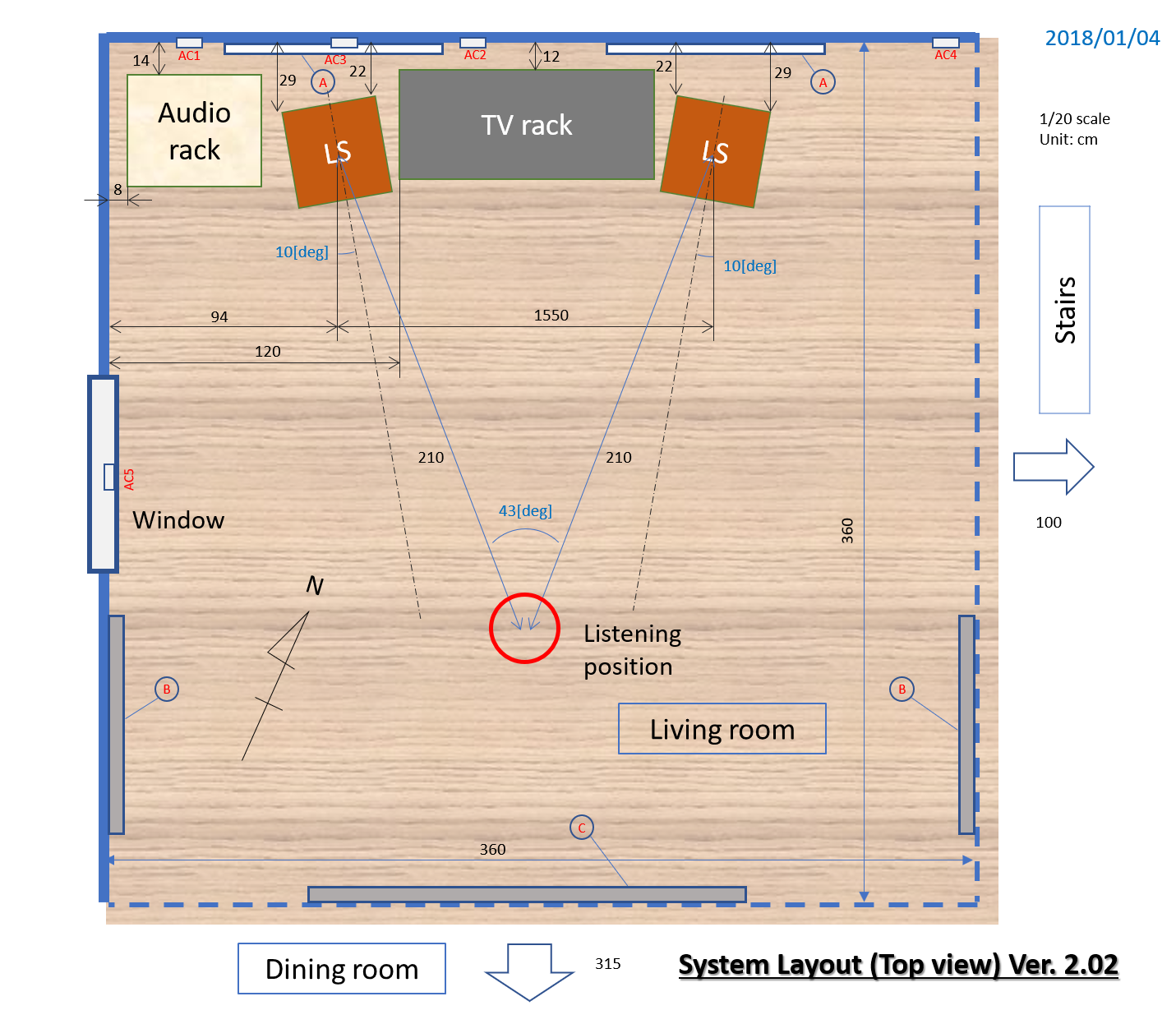 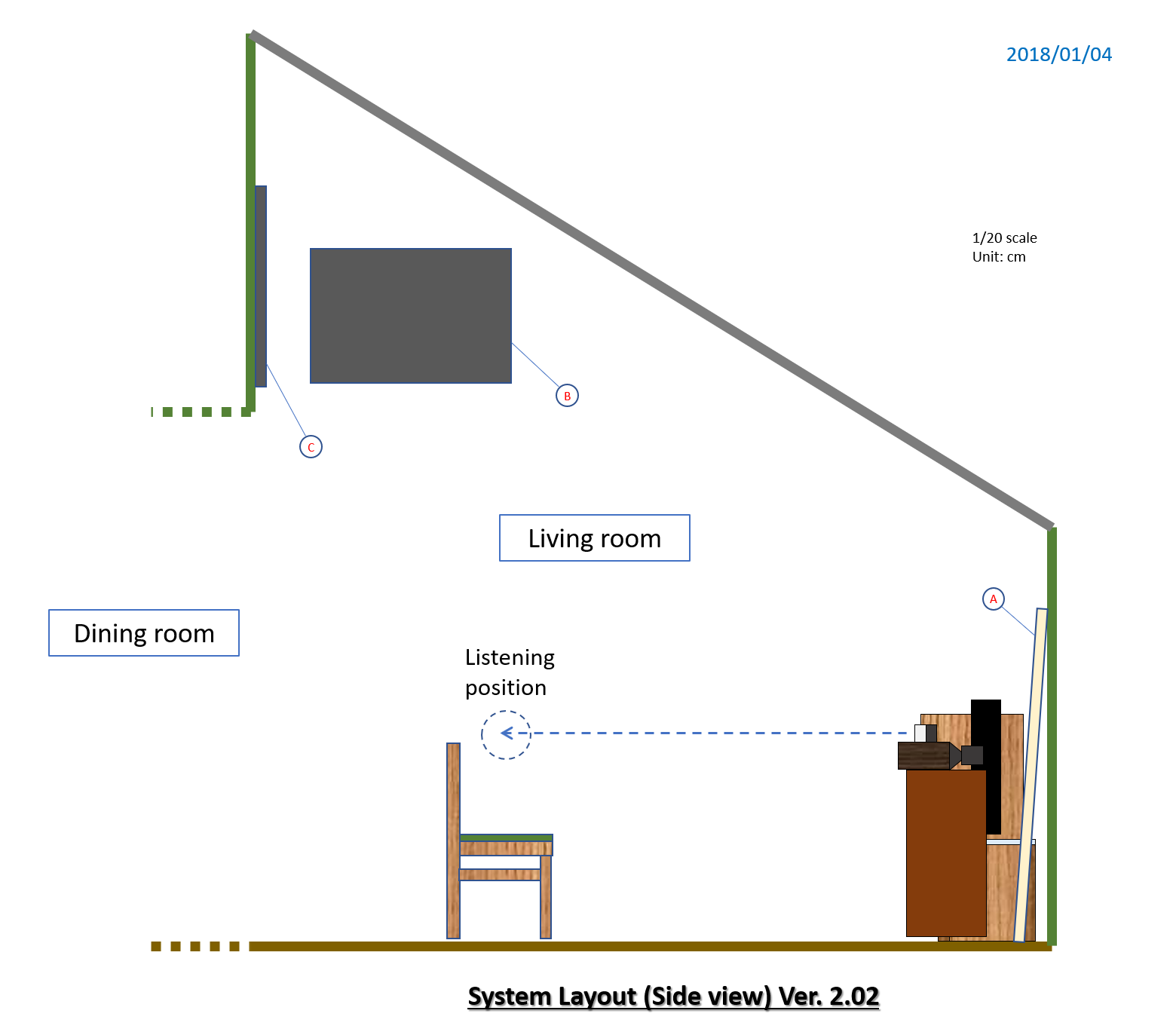 The panels designated by A, B, and C in the figure are sound absorbing panels. The details are explained in the section "Room Acoustics".

The cables used in Gaudi II are as shown in the table below.
There's no change from V2.02. 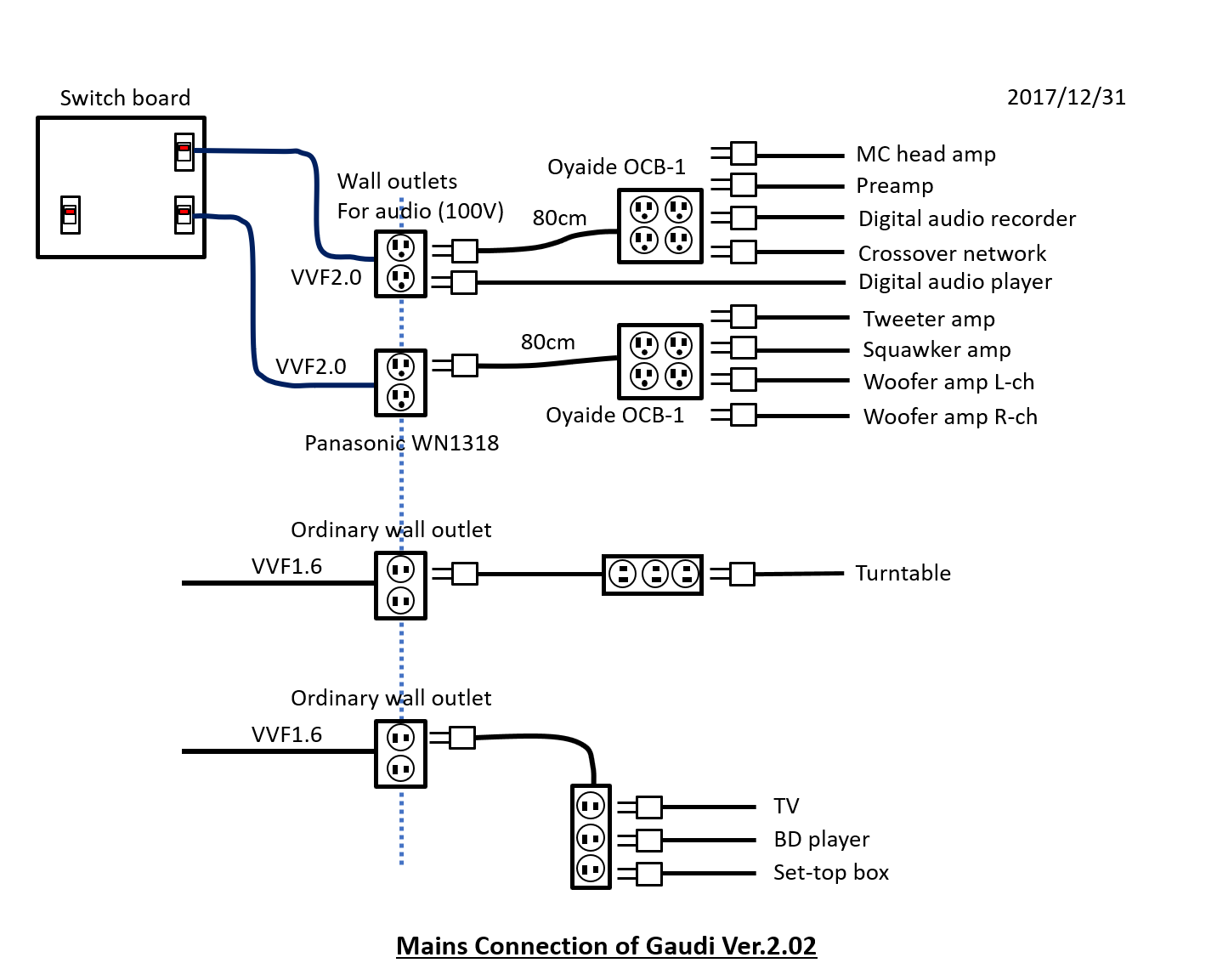 The figure on the right shows the AC power connection (click to zoom up).
It's exatcly the same as the previous version (V2.02).

The 200V outlet is not used currently.
I probably won't use it in the future too. It's because I am going to use high performance AC/DC conveters for the future amplifiers.
Today's AC/DC converters are so good in regulation. The quality of AC power supply is no longer a big issue. I am gradually losing my interest in AC power supply design.

The sound absorbing panels and the acoustic panels designated by A to C in the overall layout diagram shown in the "Layout" section are effective to improve the room acoustics. The effects of other measures are not clear.

The tile carpet I employed in Ver.2.02 was confirmed surely effective.
In addition to that, I found that thick zabuton cushions placed between the loudspeakers and the listening position are also effective. They absorb the primary reflection from the floor. That makes sound images betterl focused. 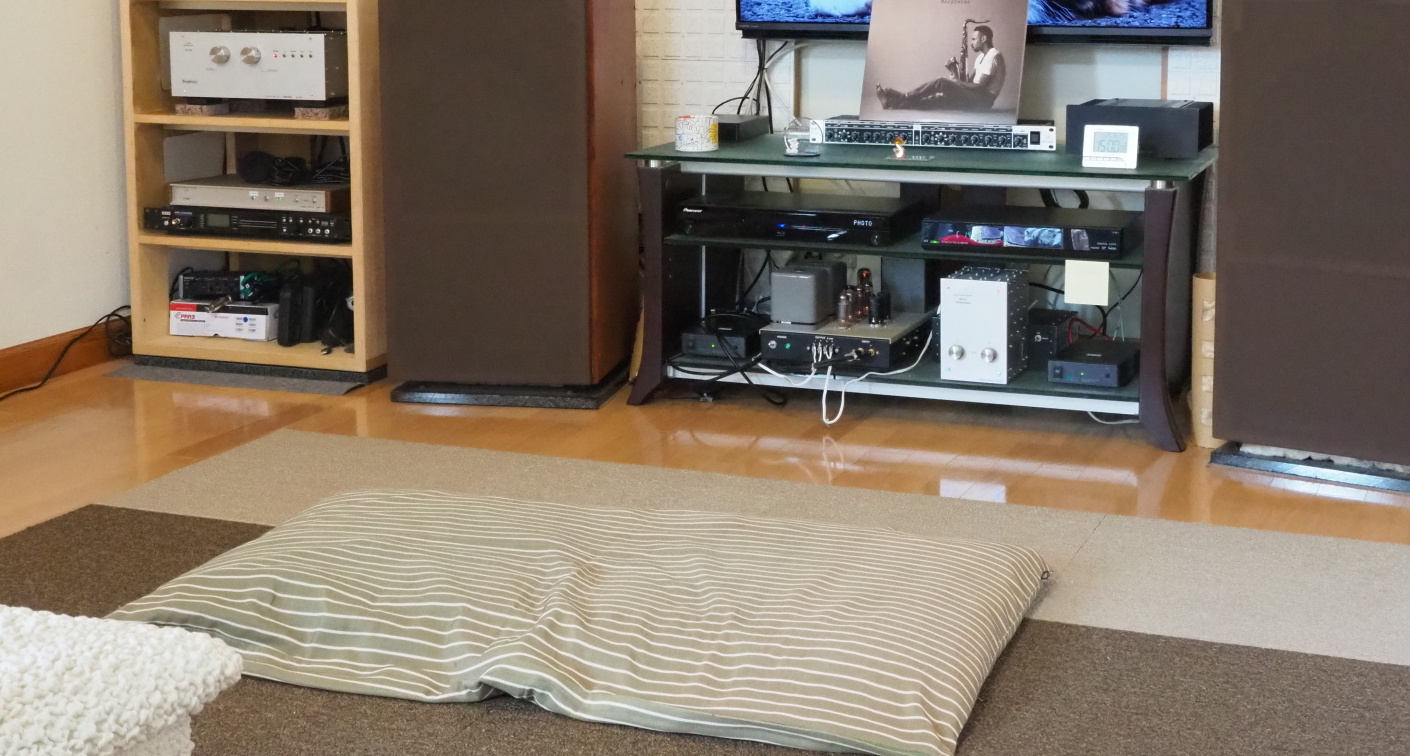 The sound quality hasn't been improved so much, but acoustic distortion has been reduced to some extent by placing the TV/display farther from the loudspeakers.
In addition, the zabuton cushion, which is substitues of sound absorbing panels, has improved stereo imaging.