This year, I fixed the system design of Gaudi. But I didn't give a name to the audio system yet. It was nameless.
In a multi-amplifier system, a separate preamp and power amps are inevitably necessary.Till then, since I had only an integrated amplifier, I decided to make a preamplifier and a power amplifier first of all.
I created the memorable first NOBODY-branded equipment, a tube power amplifier MA-201. Then, the second one, a tube preamplifier PA-202. Since I was young and worked every day dependent on physical strength till midnight these days, it probably didn't take me so many weeks to complete them.

I reused the loudspeaker and the record player that I used till then, and I constructed the mono-amplifier system. 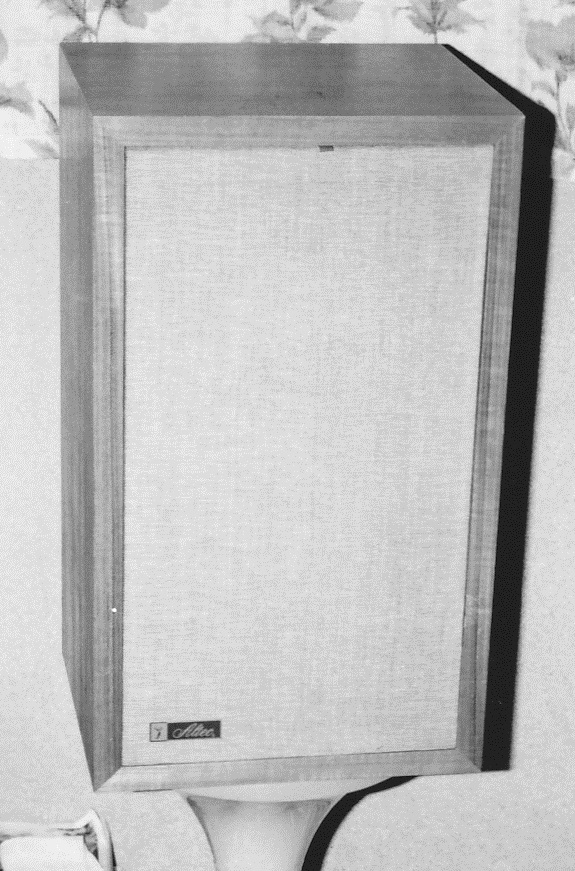 It was a shop-built two-way speaker system I had bought at the audio shop at Akihabara. Its drivers were Altec 403A (20cm/8" full-range) and Technics 5HH17 (horn tweeter). Even if it's called two-way, the network consisted of only one capacitor connected to the tweeter in series, and no attenuator. I felt 403A was well balanced with the tweeter since its upper cutoff frequency was nearly the same as the lower cutoff of the network. However, since the tweeter was slightly more inefficient, I used the tone control of the preamplifier to boost the treble.
The enclosure was made of particle boards, and was a bass reflex type.
The sound of this speaker is not so impressive. It was not good, nor bad. Soon I sold it, and used again the speaker using Fostex FE103 that I had made in my junior high school days. 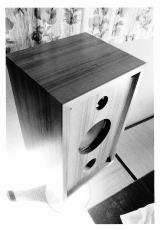 I have one memorable episode about this loudspeaker. When I was a high school sophomore, my class ran a music cafe at the annual school festival. Some of my classmates and I offered audio equipment for the cafe. I offered my self-made preamp PA-202 and this pair of speakers. This speaker sounded better in the classroom than in my room. I was a little surprised. It was favorably received among visitors and my classmates. It became clear that the acoustics of my room were not good.
This pair of speakers didn't return to my room. I sold it a classmate of mine who liked it. I made use of our school festival as a place for demonstration and sales talk. I was a bad boy.

I reused a player I made on my own as a junior high school student.
The turntable was Sony TTS-2400, a belt drive type. Since its was servo-controlled, the rotation speed was so accurate, and a wow and flutter was not felt almost. Because the drive belt absorbed vibration from the motor, the turntable was vibration-free. It was a great advantage. I think it was reasonable too. The fault was that the life of the belt is so short I had to change it so often.

The tonearm was audio-technica AT-1005 Mk II. Its list price was 8,800 yen (6,900 yen at its debut). It was the cheapest tone arm available in those days. A sub-weight was equipped for producing stylus force. The counterweight was not used for this purpose. The sub-weight slides the arm's main part. Although the sub-weight for stylus force served as a vibration absorber of the arm, this structure increased the inertia of the arm obviously and reduced traceability.

The cartridge was Satin M-14. It had some excellent features as follows: a high-output MC type using an air core coil, not using a rubber damper, user-changeable stylus, etc. It was a precious cartridge with its clear, fine sound, which was typical of MC cartridges, and handiness, which was typical of MM cartridge. The price was also reasonable (I bought it for a little more than 10,000 yen, if I remember correctly). It was a very conscientious product. I sold it to a friend of mine who wanted M-14 pretty badly in 1982. Even now, I regret it. I will buy it, without wavering, if a cartridge equivalent to M-14 can be obtained now.

I owned SHURE M75 and ELAC D355E as spare cartridges. SHURE and ELAC were patent owners of the MM Cartridge, in U.S. and Europe, respectively. It can be said these two models are a typical MM cartridge of middle-class grade. Their sound quality was a bit worse than M-14.

The cabinet was my handmade work. I glued four 15t lauan plywood boards through which mounting holes for the turntable and the tone arm were bored. Then I attached a top board and a dust cover made by an audio shop on it. This idea of the multilayered cabinet was invented by Tetsuo Nagaoka, a late audio critic. He was calling it "Baumkuchen." A Baumkuchen cabinet has the feature that it's easy to carpenter and has a large margin against acoustic feedback.

Music I Loved Then

The genre of music I most often listened to was jazz. And sometimes I listened to classical music. My favorite album then was Suzuki Isao Quartet's BLUE CITY (LP, Three Blind Mice, TBM-24). I played it so many times I worried it would wear out. I was listening to it while thinking that I would reproduce the sound of Isao Suzuki's bass perfectly some day.