Methods of realizing rich low-pitched sound by using small full-range drive-units include a system called the poly-speaker. Although the future design of Gaudi was a multi-amplifier system, I decided to make a poly-speaker system on my own as the makeshift till the completion of the multi-amplifier system, since it would take long time to complete the multi-amp system.
I also purchased an FM tuner and a cassette deck, for I wanted to take up FM air check, which was much in fashion those days. 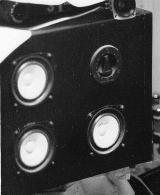 This speaker was not NOBODY-branded, since it was a rather experimental work. Therefore, I didn't give it a model number.
I decided to purchase eight units of new Fostex FE103, which was my favorite driver, and use four of them per channel. Tonezoile speaker system, which arranges drivers to one row long, was well known as a poly-speaker, though, I selected the geometry that arranges three drivers in the front and one on the side, in order to extend directivity more positively. I made the enclosure of 21t lauan plywood boards, and painted it with mat black spray lacquer.

This speaker was fairly good. The bass response was not bad, and sensitivity and power capacity were improved, compared with a single driver speaker system. On the other hand, there were problems that the acoustic image was a little blur, and the high frequency response was not good.
Later, I added a tweeter to turn it to a two-way speaker system, as a countermeasure. I chose Technics 5HH17 as the tweeter, which was my favorite driver too. It was sold for about 2,000 yen. Its price performance was so outstanding that its sound quality was as good as high-grade tweeters. The network was the LC type using air core inductors, fc (crossover frequency) was 8,000Hz and the slope was -12dB/oct.

This year, I finally obtained an FM tuner and a cassette tape deck. The FM tuner was Technics ST-3100. It was so cheap, since it was a foreclosure article. The pawnshop where I bought it was located near the university for which I took an entrance examination. I found the ST-3100 in the showcase when I dropped by the pawnshop after the entrance exam. It looked like new and the price was cheap. Next day, I went there having enough money and bought it.
By the way, I failed the exam. I thought it was a natural result. I must have concentrated on exams as a student instead of being absorbed in my hobby those days.
I bought a two-element FM antenna, which was a Pioneer. I had a good reception with it, because radio waves were strong enough in the area I lived.

Because the cassette tape deck includes mechanicals unlike the FM tuner, it seemed to me that used cassette decks were not reliable. So I decided to buy a new one. What was chosen was Pioneer CT-3. I singled it out among budget cassette tape decks expecting good sound quality. I walked about at Akihabara, looking for a cheap store. I bought it in a store like a stall after all.
This deck was a trouble maker contrary to my expectation. Troubles like unstable tape feed and tape jam happened almost every day. How many precious cassettes were ruined! After many troubles, I realized there was compatibility between the deck and cassettes. MAXELL UD was the best for CT-3. I used only MAXELL UD after this discovery.

As I had been a radio lover from my childhood and now that I could record it, I came to listen to it more and more. It is those days that I began to listen to J-POP (called new music then), in which I was almost uninterested till then. I became a fan of Yousui Inoue, Yumi Arai, Mayumi Itsuwa, Alice, and Off Course. I would listen to their tape-recorded performance. I would like to listen to some of them in better sound quality, so I bought records such as Yousui Inoue Danzetsu (LP, Plydor MR-5013), which was my very first J-POP record, Alice Alice V (LP, Express ETP-72165), and Off Course Song Is Love (LP, Express ETP-72212).

Music I Loved Then

The genre of music I most often listened to was jazz. And sometimes I listened to classical music. My favorite album then was Suzuki Isao Quartet's BLUE CITY (LP, Three Blind Mice, TBM-24). I played it so many times I worried it would wear out. I was listening to it while thinking that I would reproduce the sound of Isao Suzuki's bass perfectly some day.